Sport at the heart of Australian ‘soft diplomacy’ 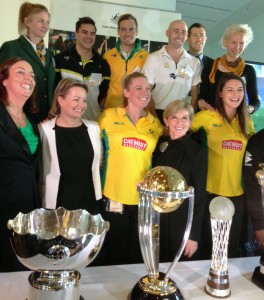 The launch of the Australian Sports Diplomacy Strategy 2015-18 aims to bring in a new era of partnership between the Australian Government and sporting organisations.

The Strategy aims to leverage Australia’s outstanding sports skills, facilities and knowledge to promote Australia and strengthen links with countries and communities in the region.

The release of the strategy saw the announcement that the Federal Government would provide $250,000 to Netball Australia to ensure Samoa, Sri Lanka, Malawi, Uganda and Zambia can participate in the Netball World Cup in Sydney in August.

Netball played a significant role in the launch of the Strategy at Parliament House in Canberra, with Australian Government Foreign Affairs Minister Julie Bishop and Sport and Health Minister Sussan Ley in attendance.

Minister Bishop stated “the Australian Sports Diplomacy Strategy 2015-18 is a game-changing joint effort between the Government and our National Sporting Organisations to showcase our sports assets and to promote Australia across the region.

“Sport has the unique power to transcend social, cultural, religious and language barriers and bridge differences. The values of sport – competition, team work and fair play – help build trust between countries and bring people together.”

“The different elements – athletes and teams, the world class sporting venues and facilities, innovation and integrity in sport, the promotion of Australia – all show our unique sports industry expertise, people and major events capabilities on the global stage.”

Linked to the Strategy, the Australian Government will provide $1 million for the Australia Awards Fellowships – short-term exchanges for athletes, officials and administrators to visit Australia to develop skills and technical expertise, training and networking.

The Government will deploy high-profile sports ambassadors to deepen regional engagement and promote Australia as a desirable trade and investment destination.

Australia will continue to invest, through its aid program, in the Pacific Sports Partnerships initiative. This encourages participation in sport, improves health outcomes and provides mentoring and leadership opportunities, especially for Pacific women and girls.

The Netball World Cup is the pinnacle event for the sport and will be hosted in Sydney in August for the first time in 24 years.