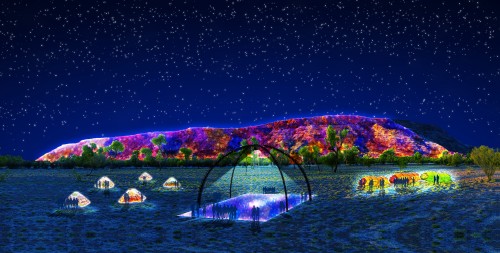 The first authentic Indigenous light festival of its kind in the world, Parrtyeme will illuminate more than 2.5 kilometres of the MacDonnell Ranges while a featured installation will be a series of large illuminated 1950s-style circle skirts featuring the watercolour artwork of Lenie Namatjira, granddaughter of Albert Namatjira.

The event has been developed by the Northern Territory Government and AGB Events, known for their work on award-winning Vivid Sydney, in close collaboration with Central Australian Aboriginal artists.

Announcing the event, Northern Territory Chief Minister and Tourism Minister Adam Giles stated “the focus of the event is helping to share art, culture and stories from the Indigenous community.

“Parrtyeme will be a breathtaking light display that will present the oldest continuous culture on earth through the newest technology on a 300-million-year-old natural canvas.

“Created in partnership with local Aboriginal artists, Parrtyeme will not only be a breathtaking event for the people of Alice Springs and the Territory, but also visitors from around Australia and the world who are looking for a truly authentic and contemporary Indigenous experience.

The inaugural annual event takes its name from the Arrernte word ‘Parrtma’, meaning ‘light up’ or ‘lighting up’.

Iris Bendor, coordinator of Ngurratjuta Iltja Ntjarra – Many Hands, an Aboriginal-owned and managed art centre stated “Parrtyeme is a terrific celebration of local culture, allowing the artistic community in Alice Springs to share their art and traditional Indigenous stories in a new way for the world to see.”

Adding that the NT Government was working hard to develop a confident culture that celebrates the Territory's outdoor lifestyle with world-class events, festivals and arts, Chief Minister Giles concluded “we’re committed to expanding the range of tourism experiences and festivals on offer in the Northern Territory.

“This will be a magnificent celebration of Indigenous culture and is sure to become a popular fixture on the NT events calendar.”

Parrtyeme will take place at the Alice Springs Desert Park.

For more information go to www.ParrtyemeAustralia.com.au