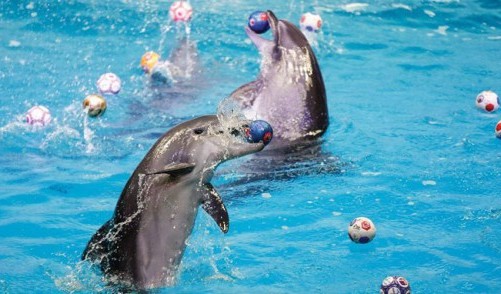 A South Korean court has ordered the release of five illegally captured dolphins which had starred in a dolphin show on the holiday island of Jeju.

Last week the court also fined the company staging the show 10 million won (US$8,500) and passed suspended jail sentences on its president and an employee, the Jeju District Court spokesman told AFP.

The court ruling stated "the defendants operated a for-profit company with illegally captured dolphins ... it's expected they would continue to take advantage if the dolphins are not confiscated."

The Government will release the dolphins into the ocean unless the court ruling is overturned on appeal.

Dong-A Ilbo newspaper said the company between 2009 and August 2010 purchased 11 dolphins for 7-10 million won each, without reporting the plan to the fisheries ministry.

Five died and one was exchanged for two sea lions from a zoo.

In a separate case, Seoul Grand Park zoo agreed last month to suspend its popular dolphin show over claims by activists that one of its dolphins was captured illegally.

The zoo said the dolphin would be reintroduced into the wild in March 2014 after gradual adjustment training. It said two other dolphins involved in the show would be kept in captivity because they were old and weak.

Some experts said dolphin shows have value and released dolphins may not be able to adapt to the ocean.

Korean National Fisheries Research and Development Institute Directot Ahn Doo-Hae was quoted by Dong-A as stating "it's wrong to say releasing dolphins is good and holding them is bad.

"Illegal seizures should be eradicated, but visiting exhibitions and going to shows can offer research opportunities for a species with a huge number. This will create social value."

Image: A dolphin show on Jeju Island. Image used for illustrative purposes only.