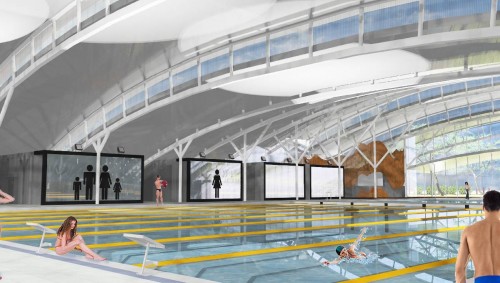 The Alexandrina Council and the City of Victor Harbor are moving forward with plans to jointly develop the Fleurieu Regional Aquatic Centre.

The Councils have jointly agreed that construction of the controversial facility will start in July 2015, with a projected completion date of March 2017. It will be built on three hectares of land gifted to the City of Victor Harbor and Alexandrina Councils by the Wright family of Beyond Developments.

However, the project has been dogged by criticism over costs and scope with aquatic facility architect Stephen Johansson of the Facility Design Group last year addressing a public meeting of concerned locals.

The public meeting was called to contrast why Johansson’s similarly equipped Moss Vale Aquatic Centre had cost less than half of the projected cost of the Fleurieu Regional Aquatic Centre.

Questions have also been asked as to why the facility’s design did not include elements originally suggested, including a fitness centre, two indoor multi-purpose courts for indoor sports, which would be capable of being adapted on demand for entertainment and conferences, a spa, sauna and steam rooms and a bowling alley.

In February, Victor Harbor resident Mike McRae, a former magistrate, past Victor Harbor Citizen of the Year and a member of the FRAC Community Reference Group, explained to the Alexandrina Council “$21 million is too expensive for a swimming pool and with three hectares of land available I believe a bigger facility can be fitted on the footprint.”

More recently, Beyond Today Developments has announced that it will build a health and wellbeing precinct on land it still owns adjacent to the Centre (FRAC).

Following this announcement, McRae has called on Council officers to reveal when it was decided the project would not include a gym, indoor courts and leisure facilities, and when “councils first became aware that the developers would go ahead with a facility adjacent”.

McRae’s concerns stem from a survey carried out on behalf of the two Councils in 2013.

He said in the survey - conducted by the SGL Consulting Group - showed the community wanted gym, fitness and indoor court facilities.

McRae’s concern is that if the current FRAC plan proceeds that it “is on target for failure” and “it will be a burden on rate payers”.

McRae contends that the Councils will be forced to subsidise FRAC's ongoing operations while the privately operated wellness and fitness facilities will make profits.