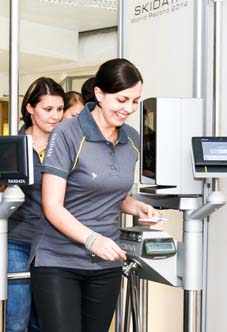 Access control and visitor management systems provider SkiData has set a new speed record for how many people can pass through an access control system in a single hour.

In a trial at the company’s in-house centre in Austria, 2,033 people passed through a single SkiData Vario - the same kind of system that is typically used in stadiums and amusement parks worldwide.

The event was monitored both electronically by video, as well as by notary Dr. Georg Zehetmayer.

Commenting on the achievement, SkiData Chief Executive Hugo Rohner explained "to bring a large number of visitors quickly and safely into a stadium is the ultimate goal and one of the strengths of SkiData.

"With the company’s systems, it is possible, for example, to get up to 60,000 fans to their seats in less than an hour.

"The achieved number put the performance of both the SkiData team as well as of our access readers to the test."

SKIDATA AG has been setting technological standards in the access control systems industry for 37 years. Starting with the world’s first electronic cash registers and printed tickets for the ski industry in 1977, since then the access and ticketing pioneer has gone on to own more than 100 patent families, including for the first hands-free ski tickets, as well as parking barrier with integrated lighting and car entry with credit cards.

Currently, SkiData is represented by 19 subsidiaries, four joint ventures, and over 100 partners in more than 70 countries. In Australia, SkiData acquired an interest in is local partner of many years, WTS, last January.