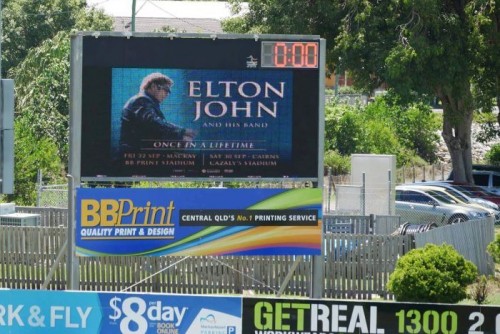 British music legend Sir Elton John will perform in Cairns and Mackay as the only Queensland stops of his four-date Once In A Lifetime Tour later this year.

The other two other Australian locations on Sir Elton's tour are yet to be announced.

Also speaking in Mackay today, promoter Michael Chugg thanked state and local governments for "incredible" support in setting up the concerts and for "their ability to work confidentially and have no leaks".

Chugg commented “it's a major, major event. It's Elton, his full band, it's a big stadium event and to be able to bring it to Mackay and Cairns is very special.

"I know that people, Elton fans from Perth and Sydney and even Singapore - we've already had inquiries about Elton's regional tour of Australia and I know people will come from all over for it.

"I've known Elton for 45 years, I've been his promoter for 20-odd years (and) he is in better form than he's ever been and it's going to be a very, very magic couple of shows."

High logistical costs and travel times generally deter major international acts from playing central and north Queensland, but Chugg advised that Sir Elton had told him on his last Australian tour he wanted to return to play in more remote locations.

An enthusiastic Premier Palaszczuk went on to say “bringing one of the world’s biggest names in music to Mackay and Cairns is a major win for this region, particularly the local tourism industry.

“This will be the first and last time Sir Elton John will perform in the region, so for many locals it will be their only opportunity to experience a live performance by one of the most highly acclaimed and successful solo artists in the world.

“It will also be a chance for us to showcase Mackay and Cairns to an international audience, with up to 5000 interstate and international visitors set to enjoy some of the best experiences and hospitality on offer in this region.”

Tourism Minister Kate Jones said the concerts were secured through a partnership between the Mackay and Cairns councils and Tourism and Events Queensland.

She added “high profile events like this are a great source of community pride and provide a welcome economic boost to regional economies through driving visitation.

“The two Elton John concerts are expected to inject up to $7.5 million into the Queensland economy.”

For the Cairns region it is the second major act announced in as many weeks, with Midnight Oil due to play Kuranda Amphitheatre in October.

Sir Elton John and his band will perform at the BB Print Stadium Mackay on 22nd September 2017 and at Cairns’ Cazalys Stadium on 30th September 2017.