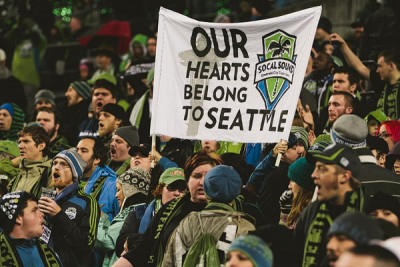 Bart Wiley, Chief Operating Officer for the Seattle Sounders Major League Soccer (MLS) franchise and an acknowledged leader in fan engagement is the latest speaker to be confirmed for the upcoming 2015 Sports Fan Summit.

Within US professional sports teams, the Seattle Sounders are regarded by many as being among the very best in terms of fan engagement; not within Seattle and the MLS but across all five major leagues. The Sounders are seen as a case study for the entire industry – a remarkable achievement given the club is less than a decade old.

While the Sounders’ success in terms of fan engagement has been built around passionate supporters, good management decisions have also played a vital role. Decisions such as choosing to operate as a European-style ‘football club’ rather than a US ‘professional sports franchise’ as have decisions that genuinely empower their supporters.

No-one is better placed to tell the Sounders story than Bart Wiley.

Previously General Manager of the precursor Sounders franchise playing in the second tier USL competition, Wiley has been with Seattle Sounders FC since their MLS debut.

He was the Sounders inaugural Operations Director, then was initially Director and subsequently GM of Business Development and has now risen to Chief Operating Officer.

Wiley is responsible for increasing revenue across corporate partnerships, ticketing, suites, and retail for the ‘soccer’ franchise. He also oversees the management of marketing, game presentation, community relations, fan development, information technology and stadium operations. Overlaying these current business responsibilities with his intimate knowledge of the Sounders’ journey, Bart will use his keynote address at the 2015 Sports Fan Summit to explore key elements to the Sounders’ Fan Engagement success.

He will then provide direction to conference delegates eager to adopt some of those approaches.

As Wiley explains, “we’re only a seven-year-old club, but one of our goals is to become a global sports brand.

“We are extremely proud of how we operate at the Sounders and relish the opportunity to explain that approach to others.

Wiley added “I really enjoyed being part of the 2012 Sports Fan Summit.

“It was easily one of the most informative sports marketing forums I’ve attended in the last decade. While it was a great opportunity to tell the Sounders story, I also learned a great deal as well.

Remarking on Wiley’s now international reputation as a great speaker on fan engagement, Sports Fan Summit organiser Simon Arkwright said “we go to great lengths to recruit great communicators – it was always obvious that Bart is exactly that!”

Wiley concludes “I am looking forward to returning to the Sports Fan Summit and hearing from 2015 speakers such as the HEAT’s Michael McCullough, the New York Jets’ Seth Rabinowitz and Roger Curtis from NASCAR’s Michigan International Speedway.”

The 2015 Sports Fan Summit, the premier sports marketing event in the Southern Hemisphere, is being held at the Sydney Cricket Ground on 23rd and 24th June.

For more information on the 2015 Sports Fan Summit, click here for details in the Australasian Leisure Management industry Calendar.