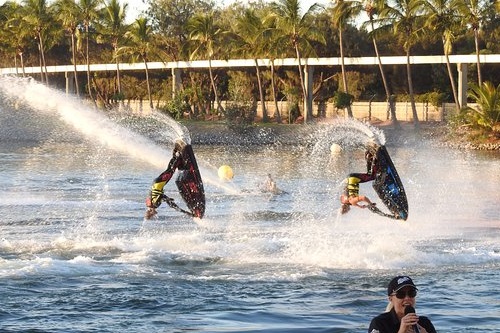 Featuring some of the world's best jet ski stunt performers, the visually spectacular show is a new and improved version of the jet ski show which featured at Sea World over the Christmas holidays. It will feature performers undertaking aerial flips and jumps during a high energy live performance twice each day at Sea World's lake.

In promoting the new show, Sea World is alos highlighting that VIP Pass holders wanting to renew their annual passes at a cost of just $99.99 have to do so before 31st July 2011.

Village Roadshow Theme Parks Executive Director of Marketing, Dale Stratford said that the aim was to continue to provide a great value, one-stop pass to fun and entertainment which is available to families Australia-wide.

Stratford explained "the VIP Pass really is the best deal around because it provides unlimited entry to three theme parks for a whole year, so you can visit over and over again, plus there is a truly exciting line-up of new attractions opening this year including multimillion dollar attractions launching at Movie World and Sea World in-time for Christmas."

This year will also see a new addition to the VIP Pass offering with the VIP Gold ticket which not only provides unlimited entry to Sea World, Warner Bros. Movie World and Wet'n'Wild Water World until 30th June 2012, but also includes one entry to each of the signature after dark events at Movie World, Fright Nights and White Christmas.

The VIP Pass also provides a host of discounts and bonus offers including great deals on food and beverage and retail items available exclusively to pass holders.

For more information go to www.MyFun.com.au