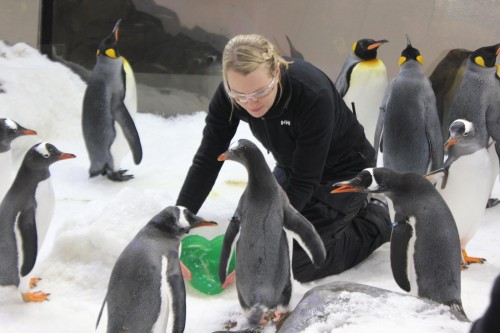 The Penguin Playground and Oceanarium residents received a special feed, as the keepers showed their love with heart-shaped tasty treats and some favourite snacks to help educate the public on what marine wildlife should and should not be eating.

Australians discard more than 9.67 billion pieces of single-use plastic each year a lot of which ends up in the oceans and mistakenly ingested by wildlife. Considering it can take up to 1,000 years to decompose one plastic bag, this issue is epidemic in Australia and needs to be improved.

The new research undertaken by SEA LIFE’s charity, SEA LIFE Trust found coffee cups, plastic bags, straws and single-use bottles to be the main plastic culprits, with the alarming statistics indicating the amount of these items outnumber the country’s population by 400%.

Coffee cups and plastic bags alone lined up, end-to-end, extend a massive 1.47 million kilometres - enough to take us to the moon more than three times.

Brianna Lang, SEA LIFE Melbourne Aquarist explains "SEA LIFE Melbourne are proud supporters of the Responsible Cafes program that aims to lower the use of disposable coffee cups, we have banned plastic bags and switched to paper straws to help lower the amount of single-use plastic at the attraction.

“We encourage everyone to get on–board and reduce their consumption of single-use plastic as its effect on wildlife can be extremely damaging. For example, plastic bags and deflated balloons are often mistaken as jellyfish and consumed by Sea turtles and marine birds.”

When it comes to single-use plastic consumption per item, plastic bags are in the lead with NSW, Victoria and Western Australia using an incredible 3.3 billion bags per year. Unfortunately, many of these bags end up in our oceans, harming marine life.

Coming in second, Australia’s coffee addiction has taken the nation around the globe a staggering seven times – with more than 2.6 billion coffee cups thrown into waste each year. Straws and single-use bottle consumption follow closely with 2.47 billion and 1.3 billion pieces of each item, respectively, making their way into landfill.

Aiming to encourage individuals to do their part for the ocean, individuals can celebrate World Oceans Day by trying to minimise their single-use plastic consumption or by being part of a beach clean exercise.