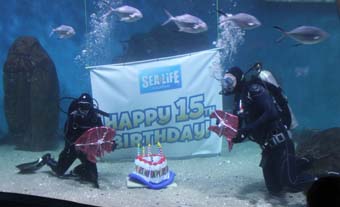 SEA LIFE Melbourne Aquarium has kicked off its 15th Birthday week with an underwater birthday party with some of their most popular fishy friends.

Held in the Aquariuam’s 2.2 million litre Oceanarium, with giant sharks, massive stingrays and hundreds of multi-coloured tropical fish, the underwater party featured a very colourful birthday cake in honour of the marine creatures.

The divers and fish celebrated in style as they exchanged gifts on the bottom of the Mermaids Garden exhibit, kicking off a week-long celebration of birthday events that will include a penguin party on Saturday 17th January.

Since our opening in January 2000, SEA LIFE Melbourne Aquarium has celebrated some momentous events:  in 2008 the attraction welcomed King and Gentoo penguins into the Antarctica exhibit while, in September 2013, the Aquarium welcomed Pinjarra – a giant saltwater crocodile.

“We have celebrated a lot of exciting milestones over the years and this year will be no exception, with some seriously amazing new exhibits set to launch in 2015.”

Mermaid Garden exhibit is just one of 12 zones of discovery open to the public at SEA LIFE Melbourne Aquarium throughout the entire school holidays.