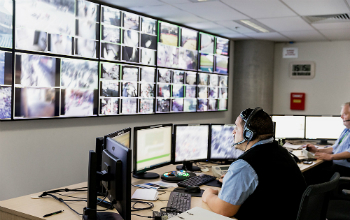 The Sydney Cricket and Sportsground Trust has developed a new security operations centre as part of a $3.5 million investment in safety and security at the SCG and Allianz Stadium.

The state-of-the-art facility will be monitored 24 hours a day, 365 days a year, making the precinct a leader in stadium security for major events.

The system features video analytics and facial recognition, with 800 high definition and ultra-high definition CCTV cameras to be installed across the two venues by the time the Ashes series arrives.

In a groundbreaking development, the surveillance system will be able to identify persons of interest and banned spectators at both grounds.

SCG Trust Chief Executive Jamie Barkley explained “we’re taking the decision here to ensure that every sports fan coming to our grounds is going to at least feel comfortable in the knowledge that they’re being well looked after.

“We can monitor people coming in from the CBD and of course the south and the north. We’re pleased that we’ve matched that of the Super Bowl in San Francisco two years ago and also even at Wembley Stadium in London.”

The centre is occupied during events by decision makers from security, catering, ticketing, cleaning and social media as well as external stakeholders such as the NSW Police, Traffic Management Centre and State Transit Authority.

The new upgrade is the most sophisticated control centre across Australian sporting venues and is one of the best of its kind worldwide.