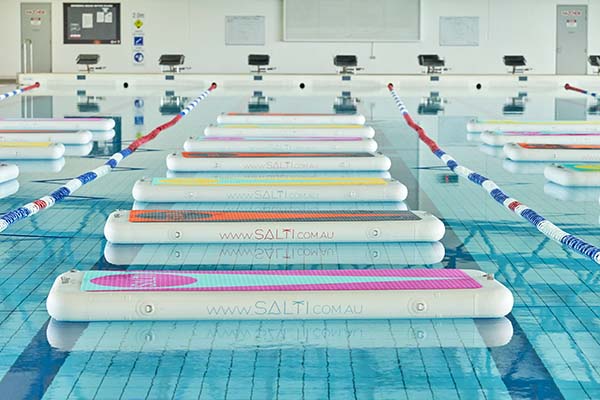 The Salti Float is an Australian designed and manufactured floating fitness platform, allowing studio group fitness classes to be moved to water. The units are made from durable, military grade PVC fabric, are light weight and, at 235cm x 90cm, fit between lanes of swimming pools.

As reported by the Victor Harbor Times, 12 Salti floats have been purchased by facility which will offer classes of 10 overseen by Group Fitness Co-ordinator Tammy Gowland.

Advising that the innovation will welcomed by members and that he expects the classes to be extremely popular, YMCA South Australia Area Manager, James Lomax stated “this is a great initiative by Tammy and her team and it again sets the centre apart by offering new and innovative exercise options. We will be the first YMCA site in South Australia to host Salti Float classes.

"The classes will be included in the all access memberships at no extra cost and we are aiming to start them with an official launch day in mid-November. Members and guests can sign up at the centre to be on the mailing list for the launch information and we now have two floats on display, so people can see what they are."

Lomax added that the launch of Salti Float classes would coincide with the introduction of Strength for Life Aqua Classes in the Centre’s hydrotherapy pool with the aim to deliver classes accessible to all.

The new group fitness innovations compliment the recent addition of Centre's new inflatable obstacle course - Mega Splash - that launched successfully in the October school holidays. The course uses the entire 25-metre indoor pool and was run as an after hours, ticketed event.

Lomax said that future Mega Splash events were being planned with details to be made available soon.

Image shows Salti floats at the Gungahlin Leisure Centre in the ACT.