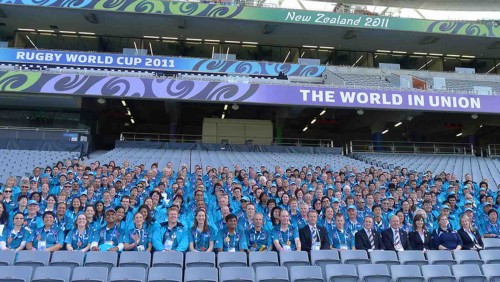 Research has found that many Rugby World Cup 2011 volunteers have delivered on their intentions to do more volunteer work after an outstanding experience with the event.

The longitudinal study, undertaken by the Victoria University of Wellington and funded by Sport New Zealand, surveyed the experiences of Rugby World Cup 2011 volunteers, before and straight after the event, then again six months and one year later.

Researcher Dr Karen Smith explains "although seven out of 10 Rugby World Cup volunteers were already active volunteers, one out of 10 were new to volunteering and the rest were people who had done some volunteer work in the past.

"About 85% of the Rugby World Cup volunteers who said they planned to do more volunteering did in fact go on to do just that and it was the events and sports sectors that benefited from this growth."

Dr Smith is a senior lecturer at Victoria University of Wellington's School of Management and a board member of Volunteering New Zealand. She carried out the research with AUT University's Associate Professor of Sport Management Geoff Dickson, who is also an Associate Director of the New Zealand Tourism Research Institute.

Associate Professor Dickson's strand of the research investigated whether there were any employment-related legacies from Rugby World Cup volunteering.

He explained "although we found that volunteering at the Rugby World Cup didn't translate into better workplace innovation, learning orientation or self-perceived employability for volunteers, which surprised me, I remain confident that there are other workplace benefits, beyond those that we investigated.

"But it was interesting that many volunteers reported gaining confidence as jobseekers, especially younger volunteers aged between 18 and 24."

Dr Smith suggests that on International Volunteer Day (today 5th December) the volunteering sector should consider how to capitalise on the enthusiasm of volunteers after future major events.

She adds "a quarter of the volunteers surveyed rated their satisfaction with their experience seven out of seven and a fifth said they hadn't experienced any low points while volunteering. Even a year after the event the positive memories of Rugby World Cup endured.

"It would make sense for the volunteer sector to harness that enthusiasm while it's still fresh."

Dr Smith says major events such as the Rugby World Cup suit many volunteers because they involve a set time commitment. She says love of rugby was a key motivation for only about one third of volunteers, stating "volunteering was more about the chance to be part of an exciting global event for the country and help make it a success.

"The social aspect of volunteering was also a huge drawcard."

Dr Smith notes that these findings have implications for major sporting events held in New Zealand in the future, concluding "as well as calling on the sports community for volunteers, it's important to draw in the wider community because that's where additional support and excitement will come from."

For the full report visit http://bit.ly/1gaHzCw