Royal Life Saving Society - Western Australia has honoured a range of industry achievements at its Annual General Meeting, presenting Fellowships and Life Memberships to its community.

As part of the evening, David Cummins and Mark Gubanyi, both current members of Royal Life Saving Society WA’s Board of Directors, were recognised for their contribution to furthering the aims and objects of the Society.

Cummins was also instrumental in the development of Royal Life Saving Society WA 2020 Strategic Plan and the revision of its constitution in 2015, to ensure it complied with changes to the Incorporated Associations Act and embraced contemporary governance standards.

He has also applied his professional expertise in advertising, and networks in the media industry to assist Royal Life Saving to better promote its various campaigns.

Mark Gubanyi was appointed as a Fellow of the Royal Life Saving Society Australia, having served the organisation as a Keep Watch Ambassador since 2004. Gubanyi is actively involved in advocacy work, conducts presentations and was a key member of the highly successful Swim Across Australia. 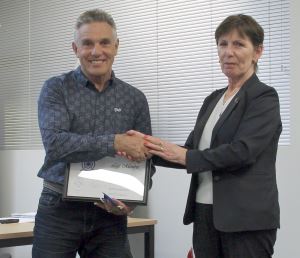 Gubanyi also became a Director of Royal Life Saving Society WA in 2014, where his drive has resulted in the establishment of grief support services, peer-to-peer networks and direct ‘help’ grants to people coping with the impact of drowning.

During more than 10 years continuous service, Fondacaro has lead the Society’s engagement with 130 public swimming pools throughout WA, which collectively have an annual patronage in excess of 10 million people. He has also provided expertise in the development of the Society’s Guidelines for Safe Pool Operation and risk management services, advocated for the inclusion of the Pool Lifeguard Award as the industry standard in public aquatic centres, championed the implementation of the Watch Around Water Parental Supervision Program, and directly contributed to the successful implementation of vocational training in safe pool operations.

Fondacaro maintains a strong network and has collaborated with sport and recreation industry leaders, he’s also assisted in the promotion of the Swim & Survive program to endorsed swim schools in public aquatic centres across the state.

Over the past 10 years public swimming pool compliance to safety standards has increased from 83% to 93%. The rate of injuries has decreased by over 25%, and there has been no drowning in public pools over that period.

A statement from Royal Life Saving Society WA explained “this can in large part be attributed to Fondacaro’s tireless work in promoting safety across the industry.”

Fondacaro is also President of the Leisure Institute of Western Australia (LIWA) Aquatics.