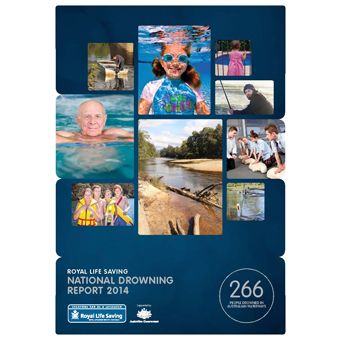 The latest Royal Life Saving National Drowning Report shows a “moderate but promising” reduction in drownings in the year from 1st July 2013 to 30th June 2014 compared to the previous 12 months.

Outlining the tragic loss of life by drowning in communities across Australia, the Royal Life Saving National Drowning Report 2014 records that 266 lives were lost to drowning in Australian waterways in 2013/14.

The Report confirms that inland waterways including rivers, lakes and dams are the leading location for drowning deaths, claiming the lives of 105 people, representing a staggering 39% of all drowning deaths.

Commenting on the Report's findings, Royal Life Saving Chief Executive Justin Scarr states "the downward trend is promising, but having set the goal of reducing drowning by 50% by 2020, Australians have a long way to go.

“Unless progress is made in preventing drowning in rivers, lakes and dams, responding to alarming increases in drowning in young people – from 15 to 24 years - and to the growing problem in people aged over 55 years, many more Australian families will be impacted by drowning”.

The Report shows that Males are four times more likely to drown than females, representing 84% of deaths at inland waterways.

This is the lowest number since 1995, and a significant reduction, after the dramatic increase to 31 deaths reported in 2012/13.

There has been a concerning increase in the number of drowning deaths among young people aged 15 to 24 years. Forty young people drowned in 2013/14, a 43% increase on the 28 deaths recorded in this age group in 2012/13.

Alcohol continues to be a major factor in drowning deaths in Australia. Alcohol was known to be involved in 18% of all drowning deaths and in almost half of those (49%) the blood alcohol reading was four times the legal limit (0.2mg/L) or higher.

Scarr added “in responding to this report, Royal Life Saving welcomes the support of the Federal Government who are backing a Royal Life Saving plan to target drowning prevention in rivers across Australia, seeking to build communities free of drowning by working to eliminate risk, educate swimmers, boaters and fishers, and reduce the impacts of alcohol.”

The Royal Life Saving National Drowning Report 2014 shows a promising reduction in the number of people drowning in Australia but, Scarr adds, "it is clear that more work needs to be done in reducing the number of drowning deaths in our rivers, creeks, lakes and dams."

The report reveals 266 people drowned in Australian waterways between 1st July 2013 and 30th June 2014, 39% of these occurring in inland waterways.