Backing Australian water safety organisations' plans to halve the number of drowning deaths by 2020, the Federal Government is to invest around $1 million a year to produce, develop and distribute water safety messages, DVDs and educational material targeting more than 1.5 million Australian children aged up to four years.

Developed by water safety campaigner and former Olympic swimming coach Laurie Lawrence (pictured below), the backing for the Kids Alive Living With Water program is the latest component in the Australian Government’s comprehensive approach to water safety, which includes programs by AUSTSWIM, Surf Life Saving Australia and the Royal Life Saving Society Australia.

Working closely with Lawrence, the Government is investing around $1 million a year to produce, develop and distribute water safety messages, DVDs and educational material targeting more than 1.5 million Australian children aged up to four years.

The backing builds on Lawrence's highly successful Kids Alive Living With Water initiative with Water DVD, with new songs, videos and books aimed at improving water safety at the beach, around pools, in homes and on farms. It does so in a fun and engaging format for young children. 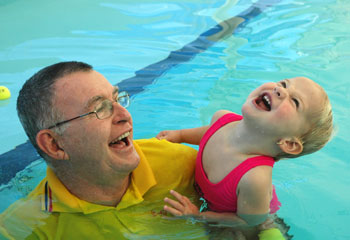 Commenting on the initiative on Friday (5th September) Minister Dutton stated “I hope that by educating children about water safety they will be able to enjoy themselves in the water without harm.

“Laurie Lawrence brings a wealth of knowledge and dedication to improving the safety of our children in water. He has developed an outstanding new curriculum that will save lives – and heartache.”

In oppositon prior to the 2013 Federal Election, Prime Minister Tony Abbott made a $15 million commitment to Australia's peak water safety agencies as part of its policy to reduce drowning across Australia. In Government, Minister Dutton confirmed this committment when launching the latest Royal Life Saving National Drowning Report for 2013 in October last year.

For more information on the Kids Alive Living With Water initiative go to www.kidsalive.com.au