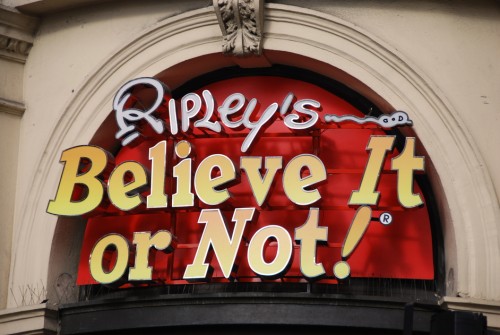 In 1918, young illustrator Robert Ripley turned to a file marked 'Dubious Athletic Achievements', a collection of sports oddities he had saved to fill a space assigned to him in the New York Globe. He created a panel made up of nine of his favorite sports feats, and called it 'Champs and Chumps'.

Published on 19th December 1918 it was an instant hit and soon expanded beyond sporting achievements when it was renamed 'Believe It or Not!'

Ripley partnered with William Randolph Hearst in 1929 to syndicate the strip globally, and by the mid 1930s it was published in more than 350 newspapers with a daily readership of 80 million.

Ripley regularly appeared in movie shorts for Vitaphone Pictures in the 1930s, and was active on the lecture circuit. He opened his first museum, an Odditorium at the 1933 World's Fair in Chicago, which was followed by several more appearances at world expositions across the country.

The anniversary of the cartoon marks the creation of one of the oldest and most iconic brands in the world. Ripley's legacy has evolved into Ripley Entertainment, a global attractions and entertainment brand.

The company's efforts include museums, aquariums, wax museums, miniature golf courses, theatres and books - all staying true to Robert Ripley's fascination with the odd, bizarre, amazing and most of all - fun.

In Australia and Asia, Ripley's Believe It or Not! attractions are in Surfers Paradise; Bangalore, India; Jeju Island, Korea; Genting Malaysia and Pattaya, Thailand.

For more information go to www.ripleys.com/

25th January 2011 - BELIEVE IT OR NOT! RIPLEY’S ODDITORIUM OPENS IN KOREA