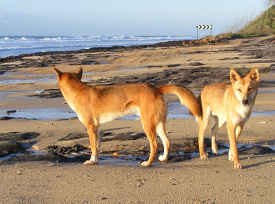 ‘On Fraser never forget, a dingo is not a pet’ will be one of several new rhyming signs being erected across Fraser Island to remind people to keep safe around the wild animals this Easter.

Queensland National Parks Minister Steve Dickson said the Easter holidays were a popular time with campers, but warned people against getting complacent.

Minister Dickson explained “Easter is a great time to visit Fraser Island, but it’s also the time when the island’s dingoes mate, test their dominance, protect their territory and sometimes behave aggressively towards people.

“As long as visitors are aware and give the animals a wide berth and avoid them and migratory shorebirds when driving on the island’s tracks and beaches, they can stay safe.

“This is another way that we are revitalising frontline services as promised at the election, by boosting education and awareness.”

Commenting on the signage, Minister Dickson stated “some signs have simple rhymes so they stick in the memory to increase dingo education.

“Visitors should walk in groups, camp in fenced campgrounds where possible, lock up food and pack away bait and always be with and supervise their children and young adults.

“Families with children should consider camping in QPWS fenced camping areas at Central Station, Dundubara, Lake Boomanjin, and Waddy Point, as well as using the commercial camping areas at Dilli Village and K’Gari. The Cathedral Beach camping area will be fenced by the end of May.”

Minister Dickson said the Queensland Government had increased efforts to promote dingo safety in response to the review into Fraser Island dingo management, adding “we are determined to protect Fraser Island's dingo population, while continuing to safeguard tourists.

“Wildlife rangers conduct regular patrols and safety briefings with campers, day tourists, resort management and staff, and safety signage in and around campgrounds has been increased.”