Researchers call for Gymnastics to be included in school curriculum 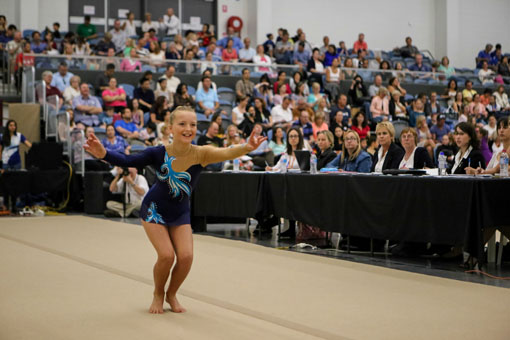 Researchers at Victoria University are calling for gymnastics to become an integral part of the physical education curriculum in primary schools following a three-year study on the development of fundamental movement skills.

This follows the recent Education Council endorsement of the Foundation - Year 10 Australian Curriculum: Health and Physical Education in which the development of fundamental movement skills is a key component.

The Victoria University study assessed over 800 children to gain an understanding of how fundamental movement skills can be improved.

Lead researcher James Rudd said the development of confident and competent movers was the most important outcome for physical education and gymnastics helped facilitate that.

Rudd explained “previous research has shown that children who master fundamental movements skills - FMS - in primary school possess higher levels of cardiovascular fitness later in life than children who do not.

“Children who master FMS are more physically active and have reduced obesity risk. There are also positive associations between FMS and a child’s social skills, self-esteem and academic performance - so it is important for overall wellbeing and development.

“A gymnastics-based PE curriculum has an accelerated effect on movement competence in comparison to a standard school PE curriculum. This was indexed by larger gains in stability skills and object control skills. In addition, following a period of coach shadowing, the gymnastics curriculum was taught by the regular classroom teacher suggesting this model is sustainable and could be implemented on a larger scale.”

“We should be developing our primary school physical education programs to specifically address fundamental movement skills.”

The health and physical education component of the Australian Curriculum focuses on the development of fundamental movement skills and concepts that help children play sport and participate in physical activities as they grow.

It suggests physical activity should be taught through a range of contexts and highlights six areas including fundamental movement skills and ‘rhythmic and expressive’ skills.

Both of these have a strong correlation with gymnastics.

The Victoria University research revealed that children who participate in gymnastics over 16 weeks improve their movement competence significantly more than those receiving a regular physical education (PE) program.

Rudd added “our research suggests gymnastics should be included in the primary school PE curriculum and classroom teachers should be given the skills to deliver effective gymnastics programs to their students.”

The final phase of the three-stage study involved over 300 children aged from six to nine years at three primary schools in Melbourne. Half of the children participated in a regular PE program for two lessons a week and half participated in Gymnastics Australia’s ‘LaunchPad’ program.

This provides indirect evidence that improving stability skills might also result in enhanced object control skills. This is, potentially, an important finding in view of the positive association that exists between object control skills, physical activity and fitness outcomes later in life.

Funded by the Australian Sports Commission, LaunchPad is an initiative of Gymnastics Australia designed to increase overall movement competence in Australian children.

Recent Australian research has demonstrated trends of low and decreasing levels of fundamental movement skills. In New South Wales, 14,000 children aged nine to 15 have been assessed over 13 years to examine their proficiency in five fundamental movement skills. At the end of primary school competency was low, with less than 50 per cent competent at running, jumping, catching, kicking and throwing over-arm.

Gymnastics Australia Chief Executive Mark Rendell said a key to improving Australian children’s fundamental movement skills was for gymnastics to again have a prominent role in the primary school curriculum.

Rendell explains “gymnastics has a rich history in Australian physical education dating back as far as 1870, but in the past 20 years or so we perceive that it has dropped off the radar in PE programming.

“One of the reasons is that primary classroom teachers are often responsible for teaching physical education and many do not have the confidence to teach gymnastics.

“It is notable that the decline in gymnastics teaching in schools has mirrored the decreasing levels of Australian children’s movement competence.

“Gymnastics is synonymous with movement and we look forward to working with educators in all states through the LaunchPad program to help put gymnastics back onto the primary school PE curriculum.”

Established in 1949, Gymnastics Australia is the national governing body for gymnastics within Australia with a mission is to promote, develop and grow gymnastics for the enjoyment of all.