Research reveals the social value of a football club 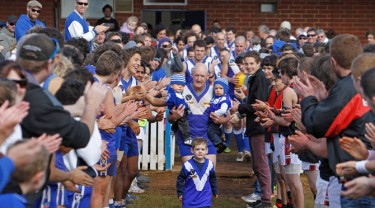 A new Latrobe University research project has revealed the true benefits of being involved with community football clubs.

The landmark study into the influence and impact that local football clubs around Victoria have on their communities provides a resounding endorsement of the many social and economic benefits that flow from Australian Football (AFL).

The Latrobe University research project, conducted in partnership with AFL Victoria and the AFL, found that community football clubs generate a range of positive effects for local communities, including heightened levels of physical and mental wellbeing, social interaction and economic activity.

The research, based on interviews and a survey of club members from across the State, highlights that regardless of where you live in Victoria, or how often you are involved in a football club each week, you are likely to experience greater social connectedness, well-being and physical and mental health than if you were not involved. These benefits apply to all club participants, including players, coaches, volunteers and supporters.

Highlights of the study include:

• For every dollar spent on a community football club, at least $4.40 is returned in social value in terms of increased social connectedness, wellbeing, mental health status, employment outcomes, personal development and physical health.
• A football club’s reach is significant and extends beyond the players, coaches, administrators and volunteers within the club; for every one player, football clubs reach 10 people in their community.
• Football clubs provide individuals, particularly those aged 15-24, with significantly increased chances of securing employment via the social networks provided by the club.
• The self-reported mental health of people aged 18-24 associated with a football club is substantially higher than the general population.

McLachlan stated “anyone who has been involved with a community football club will know that they are much more than just a sporting group.

“La Trobe University has found that the social, health, community and economic outcomes generated through involvement with our game at a community level can be life-changing. ”With more than 1,100 clubs in Victoria and over 2,600 nationally, these benefits are delivered to people and communities right across Victoria and Australia.

“At thousands of football grounds across the country each season, we have these fantastic community hubs providing people of all ages and from all walks of life an opportunity to be part of a tight-knit community, bonded by passion, common purpose and a love of our great game.”

Professor Hoye added “this study is the first anywhere in the world that has attempted to measure the social impact of a community sports club.

“Adapting the Social Return on Investment method developed in the United Kingdom to assess the impact of Australian Rules football clubs has yielded great insights as well as supporting evidence for the oft-made claims about the benefits of football clubs.

“We hope to extend this research to develop some additional resources to help local clubs maximise their social impact and thereby attract further community, government and corporate support for their endeavours.”

Click here to view a summary of the report.