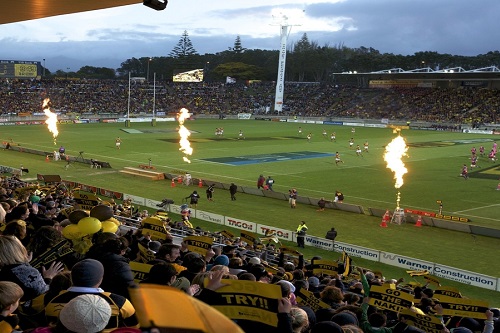 Redevelopment of the earthquake-damaged Yarrow Stadium in Taranaki is to proceed. despite strong local opposition, after receiving the backing of New Plymouth District Council (NPDC).

NPDC voted nine to five in favour of the project after it was approved last month by Taranaki Regional Council (TRC). The venue is owned by the Taranaki Stadium Trust (TST), a TRC-controlled body, but is operated by the NPDC.

The NPDC is required to approve any major development relating to the venue, as is donor and main tenant of the venue, Taranaki Rugby Football Union (TRFU). The latter body had already given its blessing to the project and had NPDC rejected it, this would have ended the matter potentially having the knock-on effect of TST taking legal action or leaving NPDC liable for any repair work.

While the project was given the go-ahead, the Stuff website said the situation facing NPDC was described as “blackmail” and “bullying” by objectors at the meeting.

The venue suffered damage from the Kaikōura earthquake back in November 2016 and its two main stands have been out of action since last June after they were deemed an earthquake risk.

Eight options for the council-owned stadium had been on the table, ranging from a basic $6 million upgrade through to a project including demolition of the stands and construction of a new covered stadium that would have cost $271 million.

Yarrow Stadium is primarily used to host rugby matches but after it was deemed an earthquake risk last year, the capacity of the once 25,000-seat venue was significantly reduced.