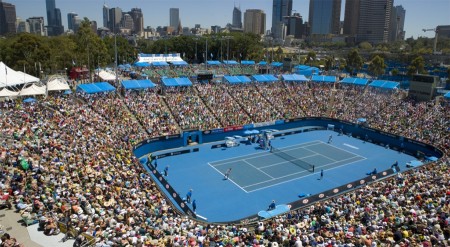 Last year's crowd mark of 651,127 was exceeded by Saturday's women's final between Maria Sharapova/Victoria Azarenka with the packed crowad at the Rafael Nadal/Novak Djokovic final looks to have pushed the event close to the magical 700,000 mark for the first time.

Speaking yesterday, Australian Open Tournament Director Craig Tiley told Melbourne newspaper the Sunday Herald Sun that the tournament had exceeded expectations, stating "I think we've focused a lot on making the tournament as comfortable as it can be for the players and we have accomplished that.

"We've also made sure we can let in as many patrons as we possibly can, plus we had a good tournament with a couple of Australians (Bernard Tomic and Lleyton Hewitt) having a great run."

Australian Open organisers will now turn their attention to the redevelopment of Melbourne Park, with work on construction of a roof on Margaret Court Arena to start next week and the redevelopment of the east side of Hisense Arena scheduled to be finished in time for next year's Open.