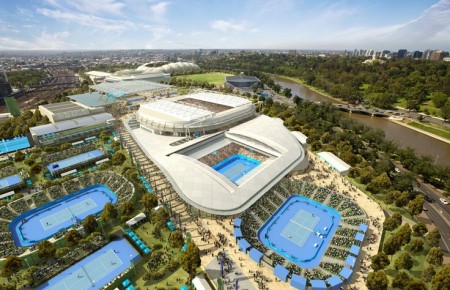 Melbourne will be the world's first Grand Slam tennis venue to have three feature courts with operable roofs.

Victorian Minister for Major Projects Denis Napthine and Minister for Sport Hugh Delahunty have this week unveiled the new design for Melbourne Park's Western Precinct, which includes a redeveloped Margaret Court Arena with an operable roof and increased capacity by 1,500 to 7,500.

It will also include the addition of a new indoor concourse area with improved patron facilities.

Explaining the development, Dr Napthine stated "this fantastic new design is focused on people and creating an active and welcoming space. The roof will provide greater shade and rain protection for the public, while the new foyer spaces are light, airy and inviting.

"New entry ways, amenities and internal connections shared with Rod Laver Arena will also make it easier for people to get around, especially during major events such as the Australian Open.

"Nearly the whole perimeter of the arena is glassed in with spectacular views of the city skyline. Inside the foyer, a timber feature wall has shapes cut out of it to mimic the trajectory of a bouncing ball.

"The 'pleated' roof design complements the adjacent Rod Laver Arena while giving the new Margaret Court Arena a stand-alone identity. I commend the architects NH Architecture and Populous for their clever work in taking an existing open air arena and creating a totally new facility.

"The Australian Open makes a vital contribution to Victoria, generating around 1,000 full time equivalent jobs and $164 million annually into the State's economy. That is why the Victorian Coalition Government is making such a substantial investment of $363 million in Melbourne Park's redevelopment.

"Providing a third operable-roof arena, expected to be completed in 2015, is the last element of this development which also includes the new Eastern Plaza and tennis training facility, a new events area on Batman Avenue, landscaping on the Oval and a water recycling system."

Minister Delahunty said the new Margaret Court Arena will further enhance Melbourne's renowned suite of sporting facilities, adding "one of the reasons Melbourne is the sporting capital is our range of quality venues.

"The upgraded Margaret Court Arena will provide a versatile mid-range venue for tennis, netball and basketball, between the 3,500-seat State Netball and Hockey Centre and the 11,000-seat Hisense Arena. It can also be configured for concerts, further improving one of the busiest entertainment precincts in the world.

"The whole Melbourne Park redevelopment is about boosting Melbourne's capacity for sporting and entertainment events, which will help secure major events such as the Australian Open for many years to come.

"Patrons coming to the Open this year will already feel the benefits of the redevelopment. The new western concourse events area is in use, the Oval has some fantastic landscaping, and there is a vastly improved connection to the rest of the action via a permanent stairway down from Rod Laver Arena.

"With up to 700,000 people expected at the Open this year and numbers forecast to increase in future, the Victorian Government is working to make sure patrons and players enjoy the very best facilities."

Image shows the design for the new Margaret Court Arena.