The focus on hosting its guests like friends has paid off, with constant impressive annual growth in customer satisfaction. Close attention is paid to feedback from guests, and comments, ideas and suggestions passed on to team members have often provided the catalyst for new initiatives and improvements.

One of three awards presented following the 2014 Tourism Industry Association New Zealand (TIANZ) Summit in Wellington this week, the ServiceIQ Visitor Experience Award recognised Skyline Queenstown’s commitment to providing world-class visitor experience by developing the skills of its staff, focusing on sustainability, being empathetic to visitors, taking action on feedback, giving visitors what they need to get maximum enjoyment, and constantly improving the end-to-end visitor experience.

Commenting on the Award, TIANZ Chief Executive Chris Roberts explained “they are really taking visitor experience to considerable and positive heights (and serves as) a shining example of a business that builds on what it does well and strives to eliminate areas of dissatisfaction.”

McQuilkin (pictured) began his career in tourism in 1980 as Queenstown Area Manager for Fiordland Travel, which became Real Journeys. 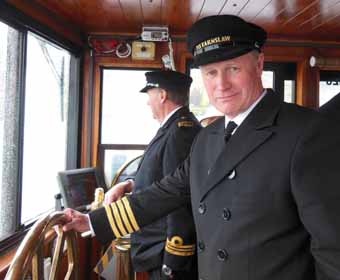 Over the years, he led many of the developments which have contributed to Real Journeys’ success, such as the unique glass-topped bullet design coaches that maximise views for all travellers, the introduction of overnight boats, the development of Walter Peak as an iconic tourism destination and the multi-day Discovery Cruises.

He has been a strong advocate for the restoration and preservation of the 102-year-old TSS Earnslaw, ensuring its future with an unusual heritage protection order that saw the steamship become the first vessel to be protected under a district plan.

He started travelling to new and emerging markets like China, Japan, Korea and India 20 years ago, long before most other New Zealand tourism operators, building long-standing relationships that have paid dividends for Real Journeys.

As one of a small group of operators who realised more needed to be done to market Queenstown, he was instrumental in setting up the Queenstown Promotion Board (now Destination Queenstown).

He is currently Chairman of the Queenstown Trails Trust.

Stephen Hamilton, Director of Horwath HTL, a member of Crowe Horwath International which sponsors the Sir Jack Newman Award, says McQuilkin is one of the unsung heroes of New Zealand tourism.

Hamilton stated “he has dedicated three decades to attracting visitors and finding innovative ways to improve their experience while they are here.

“He is a proud South Islander, keen to share with visitors his huge appreciation, knowledge and passion for New Zealand’s heritage.

“Those who know him comment on his drive, energy, passion, commitment and honesty. We are delighted to recognise his efforts with this special award.”