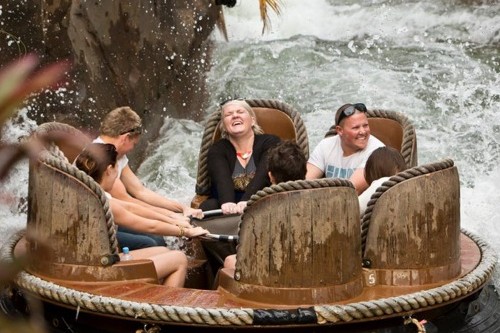 Queensland Government safety inspectors did not personally inspect, review or audit the Thunder River Rapids Ride at Dreamworld for almost seven years prior to the accident in 2016 that killed four people.

The revelation comes as the Queensland Government moves to increase scrutiny of safety standards at theme parks in a bid to rebuild public confidence.

As revealed tonight by the ABC's 7.30 program documents held by Queensland's Office of Industrial Relations, obtained under Right to Information laws, did not show any about Workplace Health and Safety Queensland (WHSQ) inspectors reviewing the Thunder River Rapids Ride.

In a statement to 7.30, a spokesperson for WHSQ advised "amusement ride owners are responsible for ensuring the safety of every ride they operate, and most importantly the safety of members of the public who ride on them".

This is based on an annual inspection carried out by a registered professional engineer engaged by the ride owner.

Professor Michael Quinlan, an expert in occupational health and safety regulation with the University of New South Wales, told 7.30 the lack of inspections would not have happened if the safety regulator had treated hazardous theme park rides as a high priority.

Professor Quinlan advised "the workplace would have been inspected more often and in greater rigour," he said.

"It wouldn't have just been the paperwork, there would be detailed operations and inspection of maintenance records, and direct inspection of the equipment, more detailed interviews with the operators, and the systems the company had in place would have been subject to more tight scrutiny.”

"I would expect it to be inspected every 12 or six months."

Under her proposal there would be mandatory major inspections of all amusement and theme park rides with engineers and inspectors conducting regular audits, mandatory requirements for ride operator training, safety management plans for theme parks and additional log book requirements.

It comes after a sweeping review of workplace health and safety in Queensland last year found immediate change was required including the need for tougher compliance and enforcement activity in theme parks.

It also resulted in a new offence where senior executives can be charged with industrial manslaughter if someone dies at their workplace.

An internal document written in 2016 by a senior bureaucrat in the Queensland Office of Industrial Relations, and obtained by the ABC, questioned the adequacy of the qualifications of its Workplace Health and Safety inspectorate and proposed urgent change.

It advised "historically, WHSQ has not required formal qualifications of the general inspectorate or investigations staff."

The coronial inquest into the fatal Thunder River Rapids accident has heard staff were both over-stretched and under-prepared for serious incidents.

During the coronial inquest into the Dreamworld disaster, serious incidents involving the Thunder River Rapids Ride have come under detailed scrutiny.

Professor Quinlan is particularly worried about a 2014 incident where rafts collided, resulting in an operator being fired for not following the correct procedure.

He added "typically with these fatal incidents, one goes back and they find 12 months, 18 months prior to incident, a very similar incident occurred where there were no fatal results which should have caused alarm.

"I think the incident where the two rafts collided should have raised some significant issues (with the theme park).

"It's easy to attribute an incident to operator error but if operators are often operating under very constrained circumstances, and there are poor maintenance and other issues, then the operator is only the last link a chain."

An official safety complaint lodged by the Australian Workers' Union in 2015 raised concerns about a serious incident involving another ride at Dreamworld, the Cyclone roller-coaster, and alleged a reduction in ride operators was to blame.

The complaint said the "roller-coaster was released from the station with its safety harnesses up".

It quoted one ride operator as saying "it is a disaster waiting to happen".

In response, a Queensland Government safety inspector visited Dreamworld, met with the theme park's safety manager and observed the ride in operation.

While the inspector found it was a critical safety event, the regulator did not take any further action.

WHSQ said that since the Dreamworld incident, it had completed 1,045 assessments of amusement devices at major shows, carnivals and theme parks, including two extensive audits of the Queensland's six major theme parks in late 2016 and late 2017.

It said that during these audits, 45 statutory notices were issued.