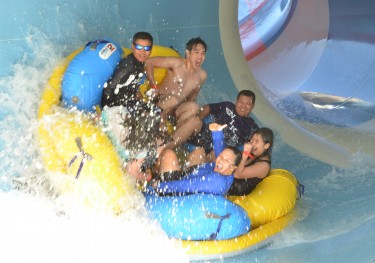 The two most iconic water rides at the newly opened Yas Waterworld Abu Dhabi are based on award-winning ride technology from ProSlide Technology.

Yas Waterworld's Falcon's Falaj adventure ride is the longest water coaster in the Middle East at 350 metres. It is a ProSlide HydroMagnetic Mammoth; a ride that marries the exhilaration of a roller coaster with the excitement of a water ride.

This patented technology is only available from ProSlide and powers a longer, steeper, faster ride and a smooth water coaster experience.

This game-changing water ride technology took home every major industry award in 2012, including the International Association of Amusement Parks and Attraction's Impact Award, given to the top innovation in the entire amusement park & attractions industry.

Dawwama's adrenaline rush is a ProSlide HydroMagnetic Tornado, the first of its kind in the world, delivering an unparalleled ride experience by combining the fast, steep uphills and downhills of the HydroMagnetic Mammoth water coaster with the award-winning Tornado. Riders are dropped at an extreme 100% grade into the 18-metre funnel where they experience the longest zero gravitational forces as the rafts sweep up the Tornado wall until they are perpendicular to the ground, then across and along its equator line.

After a series of exciting oscillations through the funnel, the rafts finally descend into the landing pool below.

Explaining the use of ProSlide Technology's innovation, Yas Waterworld General Manager Mike Oswald states "we turned to ProSlide for our two most spectacular water rides because we want to deliver out-of-this-world experiences that create lasting memories for our guests.

"We're counting on these custom, one-of-a-kind rides to help us attract close to 700,000 guests a year and be profitable in our first year."

ProSlide President and Chief Executive Rick Hunter adds "what we care about most is helping our customers differentiate themselves in the market, which is why virtually every major waterpark in the world - Yas Waterworld included - trusts their anchor attractions to only ProSlide."

Spread over 15 hectares, Yas Waterworld Abu Dhabi's theme follows the adventures of a young Emirati girl in search of a legendary pearl that brought prosperity to her village.

Yas Waterworld was featured in the January/February 2013 issue of Australasian Leisure Management.