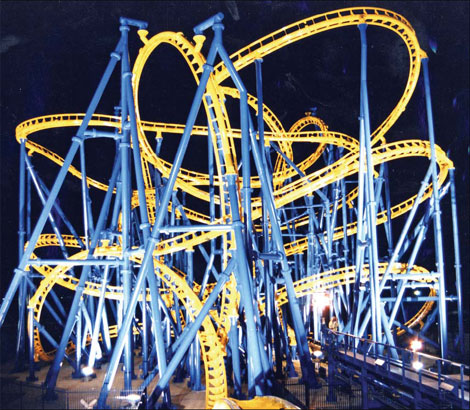 Situated in the state-of-the-art business centre of Tomorrow Square, the office is now open and readily accessible to clients in Asia.

With its world-renowned thrill ride projects across the globe, Baltimore, USA-based Premier Rides garnered the attention of Maryland Governor Martin O'Malley, who invited company President Jim Seay to join him on a recent two-week trade mission to China, Vietnam, and Korea. The success of the trip solidified the company's intention of opening the new office in Shanghai.

Premier has been developing its Asian markets, including participating in trade shows such as the Asian Attractions Expo, and by travelling throughout the region to meet with a number of clients.

The company has completed many projects recently in Singapore, Indonesia, and China, and announced another major project in Beijing. Working in collaboration with its Maryland headquarters, the new Shanghai office is helping to advance a world record-breaking coaster project for the Great Mall of China shopping and entertainment centre.

President Jim Seay explains "it is important that we are close to our clients (as) we need to make sure they are receiving the quality of service and personal attention that Premier set as the foundation for its reputation. The Shanghai office allows us to do just that."

Ning Shao is the office lead. He has significant experience in the world of themed entertainment, having led expansion efforts in China for industry icons such as IMAX Corporation, BRC Imagination Arts, and RTKL Associates, Inc.

Ning explains "I am very excited to head Premier's new office in China. The Shanghai office will be a great focal point for Premier's growth in Asia. I have had the good fortune to work with several of the industry's top companies and I am honored to work with another one."

The additional work generated by the Shanghai office will contribute to the expansion of Premier Rides, which is hiring new staff to meet its increased product demand.

For more information go to www.premier-rides.com

6th May 2011 - AMUSEMENT INDUSTRY CONVERGES ON THE GOLD COAST