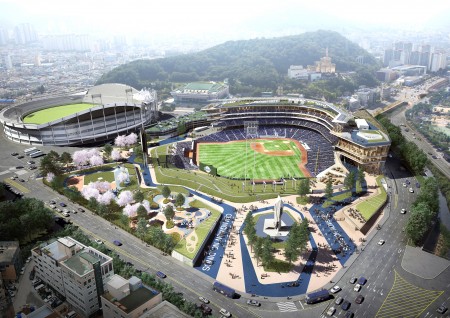 Populous will now design the 22,000 seat Baseball Park (located near Busan in the south of the Korean peninsula), which has a construction value of US$100 million.

A feature of the design will include a roof top garden stretching the length of the building area – taking its inspiration from the design of the High Line in Manhattan.

Populous Senior Principal Andrew James said the project is the first true baseball ballpark for families and fans in South Korea and the design has built on the firm’s extensive experience with MLB in the United States, particularly Petco Park in San Diego and Target Field in Minneapolis.

James explains “it’s a major breakthrough for sport and entertainment in Korea, because the stadium is designed with post match legacy in mind, to be busy and active all year round, not just on game day.

“It is the first baseball stadium in South Korea to have 360 open views to the field and circulation around the whole stadium.

“The fixed seating of the infield is complimented by the casual seating areas around the outfield, with grass berms and timber terraces, to create a flexible, relaxed space for families and fans.”

The NC Dinos are one of the newest teams in the Korean Baseball League, formed in 2011, but this year was ranked second in the League with an ever growing fan base.

Their new stadium will also be surrounded by interactive parklands and all commercial spaces, in the stadium, including restaurants, fan retail shop, function room and café have also been designed for use outside game day.

Populous is designing the project with local partner Haeahn Consortium with construction is scheduled for completion in 2018.