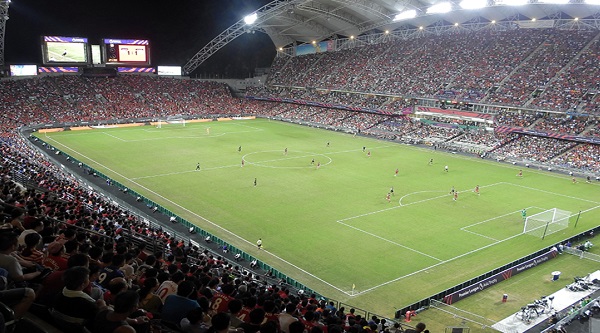 Having awarded the contract to develop the new Kai Tak Sports Park over the Christmas period, the Hong Kong Government has proposed an 80% reduction in capacity for the city’s So Kon Po Stadium when the new venue is completed.

The South China Morning Post newspaper has this week reported the proposal that the existing Hong Kong Stadium should have around 80% of its 40,000 seats removed on the back of the announcement.

The newspaper citing a proposal drafted by the Leisure and Cultural Services Department, reported that the decision has been taken with the planned 50,000-seat stadium at Kai Tak Sports Park set to “largely fulfil the same function”.

The Department said “large sporting events” currently held at Hong Kong Stadium would be held at the new site - lowering the need for the current venue to retain its present capacity – with the venue to be repurposed as a public sports ground.

According to the Post, the department has proposed that a spectator stand that can seat 8,000 to 9,000 people be built, along with multi-purpose conference rooms, a media centre and a sufficiently-sized car park.

However, the Wan Chai District Council is objecting to the proposal, with Council members criticising the lack of information concerning the plan, stating it would be “irresponsible” for them to approve the project, which is still in the conceptual planning stage.

Councillors also expressed concerns that the plan would also lead to the demolition of the Wan Chai Sports Ground.

Localist Councillor Clarisse Yeung Suet-ying asked if the government had a “hidden agenda”, telling the South China Morning Post “the Hong Kong Stadium should not be redeveloped until the Kai Tak Sports Park is completed. Otherwise, Hong Kong might have no venue to hold large-scale sports events.

“The only reason I can think of is that the Government wants to demolish Wan Chai Sports Ground sooner after the redevelopment of the Hong Kong Stadium to make way for the development of exhibition facilities in Wan Chai. In this sense, the redevelopment plan is more of a commercial project than a sports one.”

However, Yuen Hing-keung, a home affairs official in charge of sports planning, denied this is the case, advising “there is no hidden agenda. The plan of converting the stadium can allow the provision of more community sports facilities to benefit the general public as well as to promote sports.”