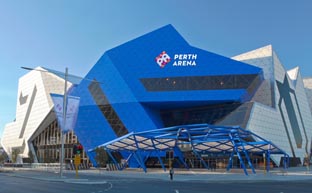 With the Perth Arena set to celebrate its first anniversary at the weekend its designers have received two top architecture prizes.

The Australian Institute of Architecture's judges praised the $550 million landmark entertainment venue as "a radical, abstract, graphic alien that has landed on the edge of the CBD".

The judges added that the scale, colours and contrasts of its bold graphic language allowed it to stand out against the urban landscape and also praised the interior, noting its unfolding of cathedral-scaled spaces, of folding and fractured planes, and vertiginous crazed staircases, as being "like an enormous Cabinet of Dr Caligari."

ARM Architects were also honoured for its $135 million redevelopment of Hamer Hall at the Victorian Arts Centre.

A total of 38 projects received 55 awards and commendations across 12 categories.

Elton John opened the arena on 10th November 2013 and since then it has hosted acts including Pink, Rihanna, Kiss and The Jacksons.

For more information go to www.architecture.com.au/events/national/awards