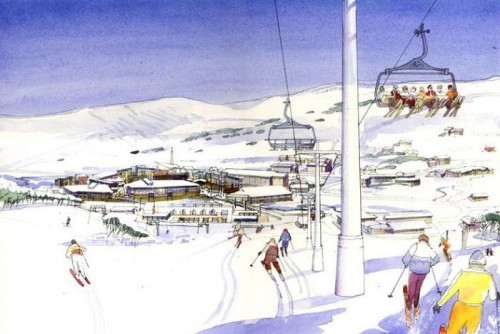 The ski industry says an 880-bed village to be built in the Snowy Mountains after a NSW Government deal with a Packer-owned company will boost the local economy.

The deal ploughs the path for a $112 million development at Perisher Blue ski resort which the NSW Government says will create more than 1,300 construction jobs.

Under the agreement, James Packer's Consolidated Press Holdings (CPH) will relinquish control of Perisher Blue's car park, which is earmarked for a village including shops, accommodation, restaurants and bars.

In return, CPH will be allowed to consolidate the ski resort's 10 separate leases into a single 40-year lease with an option to extend it for 20 years.

Graeme Anderson, President of the Ski Lodges Organisation of Perisher, Smiggins and Guthega, said the deal's economic benefits were unquestionable explaining that it would boost NSW tourism revenue, provide Perisher with future financial confidence and improve its international appeal.

"The whole idea is to get Perisher really competing with Thredbo. This will get the numbers (of skiers) up and give us a future," Anderson told AAP.

Anderson added that increased visitor numbers would bring in more than $1 million a week in ski lift tickets alone.

NSW Premier Nathan Rees lauded the agreement, saying it would also result in about 400 full-time jobs at the village once completed.

"It creates the right environment to support long-term investment, which will attract more tourists, create hundreds of jobs and inject more money into the local Snowy Mountains economy," Premier Rees said in a statement on Wednesday.

"It will also lead to improved environmental management and contribute to the region's reputation as a world class alpine resort destination."

However, the NSW Green Party has criticised the deal, saying it's another example of government trading environmental sustainability of the Kosciusko National Park for profit.

The concept plan for an 800-bed accommodation development was approved in 2006 and the NSW Government is now expected to begin the tendering process.
AAP