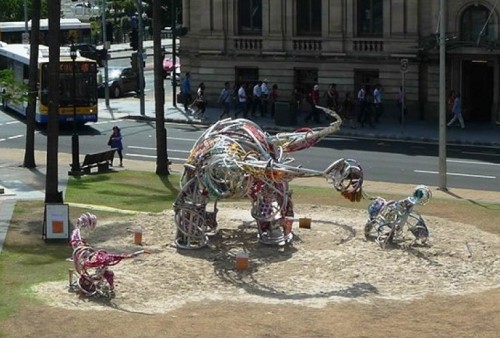 After welcoming world leaders to Brisbane during the G20 Leaders’ Summit, a family of life-sized dinosaur sculptures has found a permanent home in the outback Queensland town of Eromanga.

With the Eromanga Natural History Museum already displaying Australia's largest dinosaur ever to be discovered, the popular public artworks commissioned as part of the Cultural Celebrations of the G20 Leader’s Summit in 2014 are now an addition to the region’s attractions.

The 95 to 98 million-year-old Eromanga dinosaur fossils are some of the worlds’ largest and are a significant drawcard for visitors to the town.

Gifted by the Queensland Government to the Eromanga Natural History Museum, the Knot-o-saurus’ sculptures, crafted from over one kilometre of aluminium, feature one large and two baby dinosaurs, modelled on the Sauropod.

Announcing the relocation of the sculptures, Queensland Premier Annastacia Palaszczuk stated “the addition of this aluminium dinosaur family at Eromanga will help boost the tourism opportunities of the dinosaur attractions in the Outback and assist this community to attract tourists to the area.”

“Outback Queensland’s tourism industry contributes around $516 million to the local economy and generates around 4,400 jobs.”

Quilpie Shire Mayor and Eromanga Natural History Museum Executive Chairman Stuart McKenzie said the life-sized Sauropods have a special connection to their new home, where the largest Sauropod dinosaurs in Australia were discovered.

McKenzie added “the public Museum is welcoming a steady stream of visitors keen to see all the internationally significant examples of Australian fossil heritage.”

Image: The dinosaur sculptures in Brisbane during the G20 Summit, Courtesy of the ABC.