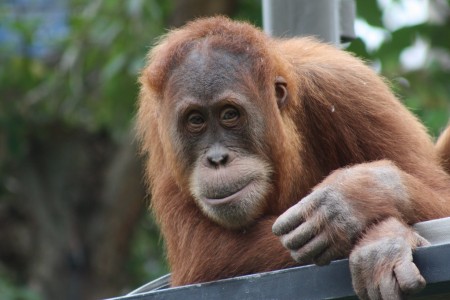 A orangutan escaped its enclosure at Melbourne Zoo on Monday afternoon (13th July), leading to a brief lockdown of the attraction.

Malu, a young male described as having an “adventurous spirit”on the Zoo’s website, roamed through the Zoo’s public areas, causing visitors to be evacuated, before it was tranquilised and recaptured

The 11-year-old male ape, also known as Menyaru, was cornered by zookeepers while visitors at the Zoo were evacuated to safe areas.

Commenting on the incident a Melbourne Zoo spokesperson stated “at no time were visitors or staff in danger.

“Melbourne Zoo staff acted quickly to lock down the zoo and all visitors have been safely ushered into secure areas.”

After Malu’s escape the Melbourne Zoo tweeted: “Malu the #orangutan has returned to his night quarters after a brief stroll through the public area.”

The Zoos Victoria website also describes Malu as being a “skilled climber”.