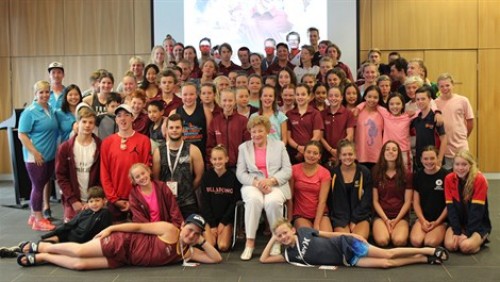 A group of young swimmers were treated to an inspiring talk from one of the nation’s greatest sporting legends, Marjorie Jackson-Nelson, as they prepared for the South Australian Long Course Swimming Championships this week.

The breakfast event at the SA Aquatic and Leisure Centre yesterday gave the young athletes an insight into what it was like to compete in the late 1940s and early 1950s, as well an idea of the resilience and determination it takes to be an iconic Australian, leader and role model.

The double Olympic Gold medal sprinter showcased her drive as she spoke of her dedication and can-do approach to athletics highlighting the need to back yourself.

The sporting legend, who served as Governor of South Australia from 2001 to 2007, stated “it’s about believing in yourself. You can do anything if you believe in yourself.

“Can’t isn’t in my vocabulary, and it shouldn’t be in yours.”

As a teenager, Jackson-Nelson was the focus of the aspirations of a nation, so pressure and nerves, something she reassured today’s swimmers are normal, encouraged to achieve her best.

She advised “I had the whole country on my back. Australia had put faith in me.

“Once it became time to race, I’d tune out. Once the gun went off, my mind was just on my race.” 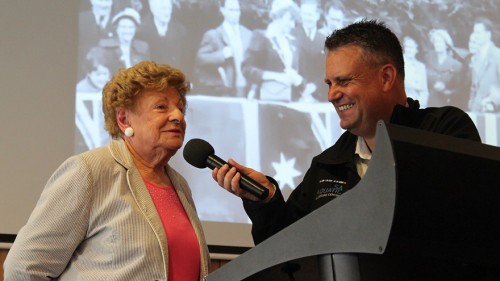 Becoming the first Australian woman to win an Olympic Gold Medal in athletics and dominating female sprinting, Jackson-Nelson fascinated the Marion Swimming Club members with stories on how training conditions were different and how she believes athletes of today have it ‘easier’.

Her diet consisted of mainly potatoes and running on what felt like cement as she trained in fog and darkness with only the light from her coaches car headlights to show her the way. She even recalled her first pair of running shoes being second hand and so big that she needed to stuff them with newspaper.

After her whirlwind five-year running career, with two Olympic gold medals, numerous world records and other achievements under her belt, the legend settled down and moved to Adelaide with fellow International cyclist - Peter Nelson. After marrying at age 22, Peter and Marjorie settled into life after sport.

Sadly Peter Nelson dies as a result of Leukemia in 1977 and that tragedy saw her focus shift. The legend who went from being known for her sporting achievements was soon seen as a driving force in the charity world. Since launching the Peter Nelson Leukemia Research Fellowship Fund, she has raised over $6 million which has resulted in a full time researcher being appointed in Adelaide.

With a strong focus still on her beloved foundation, from 2001 until 2007 she went down a different path and was appointed the Governor of South Australia. During her appointment she focused on her relationships with disadvantaged youth and breaking barriers for athletes and women alike. 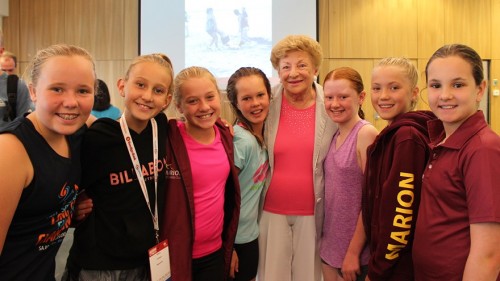 After encouraging the Marion swimmers and enchanting them with her career highlights, she spoke of the importance of participating in events such as the South Australian Long Course Swimming Championships.

With the SA Aquatic and Leisure Centre’ swimmers taking on other elite athletes from local clubs, as well as other clubs from interstate and overseas, the event is drawing 2,000 competitors, spectators, officials and volunteers over its six days.

The annual event not only provides a platform for swimmers to go their hardest and compete at a state level, but drives a significant economic benefit.

Swimming SA Chief Executive Michelle Doyle explained “with an expected $3 million economic impact for our state, it’s great to see such an event held at the SA Aquatic and Leisure Centre which has world class facilities.

“It’s great for kids to be recognized at a state level, but then also great preparation for Commonwealth Games trials and Australian age trials.”