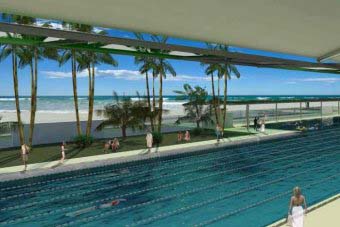 The City of Stirling has announced plans for a $26 million ocean-side pool to be built at Perth’s Scarborough Beach.

The new eight lane, 50-metre chlorinated, heated pool will be located south of the amphitheatre and current surf club. The facility is planned to include the 50 metre pool, a connected learn-to-swim zone, covered spectator seating, change rooms and a cafe.

Stirling Mayor Giovanni Italiano said construction was expected to begin late next year and be complete by late 2017, saying that the council would be applying for funding for the project from both the Rederal and Western Australian Governments.

Mayor Italiano told the ABC “with the addition of this new beach pool, Scarborough will become the Bondi of the west as a tourist destination- a great place to live, work, relax and swim in every season of the year.”

Western Australian Premier Colin Barnett said that more than $3 million had already been set aside for the beach-side pool from the sale of state-owned land at the old Scarborough High School site, stating “so that money goes into it from the start, otherwise the City of Stirling will fund that.”

The Western Australian Government and the City of Stirling are already jointly funding a separate $60 million revitalisation of the Scarborough beach front.

"This is going to be a superb precinct and will probably become the most visited beach in Western Australia."