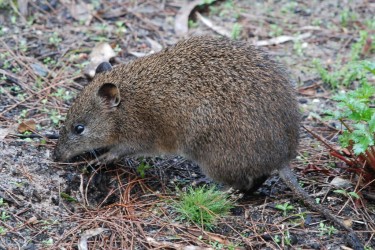 The NSW Government has announced a series of new projects to protect NSW’s most threatened native animal species.

NSW Environment Minister Rob Stokes said the $4.8 million Saving our Species program has been established to secure the future of NSW’s 970 threatened species.

Minister Stokes explained "these plants and animals face the real risk of disappearing from the wild forever. This is not something the NSW Government or the community are prepared to accept.

“We are taking action to safeguard the viability of these animals so future generations will be able to see them in the wild, and not just in the confinement of a zoo.

“A total of 28 new draft conservation projects have been developed for the program. The projects include protection of the green and golden bell frog, which will involve habitat conservation, monitoring and community engagement activities at sites across NSW.”

The Saving our Species program aims to protect threatened species by:

• Prioritising projects based on their benefit to the species, feasibility and cost to help make the most effective investments in threatened species conservation;
• Monitoring and managing the effectiveness of projects so they can be refined;
• Encouraging community, corporate and government participation in threatened species conservation by providing a website and a database with information on project sites and research opportunities;
• Allocating all threatened species to one of six management streams that provide the best outcomes for each species; and
• Providing targeted conservation projects that set out the actions required to save 370 specific plants and animals on locally or regionally managed sites

These conservation projects will be added to the 368 projects for other threatened species which are currently guiding conservation action across NSW.

Comments are being sought until 13th February 2015.

The draft projects can be reviewed and comments provided online at www.environment.nsw.gov.au/threatenedspecies/PASAmendmentSpecies.htm