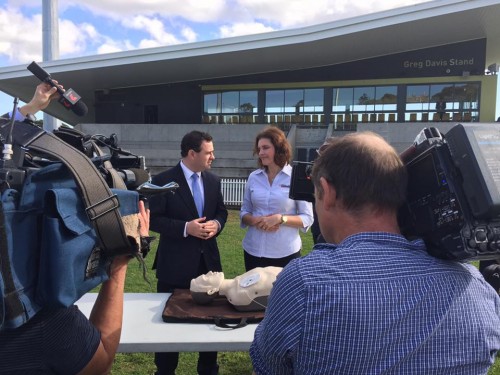 Spectators and players at community sports clubs will benefit from a rollout of defibrillators announced by the NSW Government.

The 2017/18 NSW Budget is to allocate $4 million over four years to assist sporting clubs across NSW purchase and maintain automatic external defibrillators (AEDs) as part of the Local Sport Defibrillator Program.

Announcing the program, NSW Treasurer Dominic Perrottet explained “the first eight minutes after a person has a cardiac arrest are the most critical and early access to CPR and defibrillation can increase the likelihood of survival by up to 75%.

“We will be rolling out more than 2,500 AEDs over the next four years, under the Local Sports Defibrillation Program, which will also see community members trained in how to use them.”

Launching the program at Drummoyne Oval, NSW Minister for Sport Stuart Ayres said some form of cardiac arrest is experienced by up to 33,000 people in Australia every year.

Minister Ayres stated “with thousands of spectators and players attending sporting events around the state every week, having AEDs at those venues will save lives.” 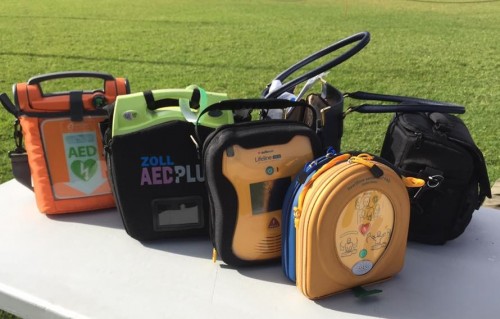 Julie Hughes, of the Michael Hughes Foundation, which she founded after her husband dies of sudden cardiac arrest in 2013, added “the difference between life and death is people being able to perform CPR and use an AED in the first few minutes.”

Full details of the Local Sport Defibrillator Program, which will seek a co-funding contribution from eligible sports clubs, will be available shortly.

Applications from clubs will be invited in the fourth quarter of this year through the NSW Office of Sport website.

Images: NSW Minister for Sport Stuart Ayres and Julie Hughes of the Michael Hughes Foundation attract media interest at the launch of the Local Sport Defibrillator Program (top) and a selection of AEDs at the launch (below). Images courtesy of Andrew Paschalidis/Heartbeat of Football.