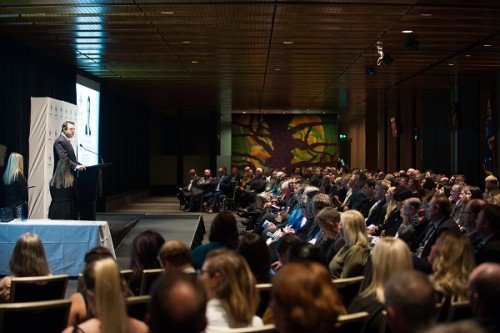 Held at NSW Parliament House on Thursday 29th June in front of a large crowd, the event was hosted by NSW Minister for Sport Stuart Ayres, who congratulated the finalists and addressed the audience about the value of volunteers and community sport.

Minster Ayres stated “sport is a vital part of the social and economic fabric of NSW. Sport brings us together and helps keep our communities fit, healthy and engaged.

“The local sporting club is so much more than a place to play sport. It is often the hub of the community and a place where people can extend circles of friendship and build social connections.

“Community sport is almost entirely run by a volunteer workforce - which is unique to our sector. Sport would simply not exist without volunteers.”

Over 500,000 people in NSW volunteer their time every year to ensure that the state’s 2.5 million sporting participants can take the field each week. In NSW alone the value of that voluntary labour would be measured in the hundreds of millions of dollars.

This year 10 winners were named at the 2017 NSW Community Sports Awards across coaching, officiating, teams, events and clubs for their dedication to improving the lives of millions of people through sport. The night also paid homage to 16 Distinguished Long Service recipients for those that have given exceptional long service to their sport.

In paying tribute to the finalists and winners Sport NSW Chairperson Joseph La Posta emphasised the important role sport plays in the lives of so many. 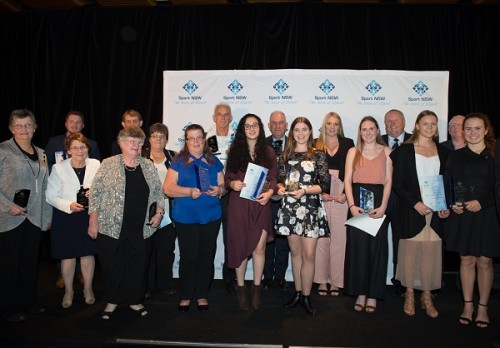 La Posta advised “community sport is part of our way of life. None of this can happen without the hard work and dedication of volunteers, of which some of our finest are here tonight. Volunteering in sport builds great friendships and creates stronger and more inclusive communities.

“The fact that these benefits are so often driven and underpinned by volunteers can never be underestimated.”

The Parliament House event attracted over 275 people with representatives from sports across the state in attendance to congratulate the finalists and award recipients.

Young Official of the Year (Joint Winner) - Shauna Flynn - Australian football
Flynn is a Boundary Umpire for AFL South Coast Senior Division and is part of a regular exchange to officiate at AFL Sydney Premier Division. The 16-year-old boundary umpired at the elite level in an AFLW game in Sydney. Flynn is a member of the Boundary Umpire Leadership Team mentoring and supporting newcomers, playing an integral part in recruiting and retaining new female umpires.

Young Official of the Year (Joint Winner) - Chloe Johnston - hockey
Johnston regularly umpires at the local association and mentors junior umpires in the Illawarra. At only 18-years, she has represented NSW at U15 National Championships, Indoor Nationals for U18 and U15 including Gold Medal matches. In 2016 she was awarded the Women’s Umpire of the Year for the Illawarra South Coast Hockey Association.

Community Official of the Year - David Baggio - touch football
Baggio is a Level 6 Referee as well as Presenter / Facilitator and Referee Coach. He officiated at local, state, national and international levels, including the Junior State Cup, Vawdon Cup, Youth Trans Tasman, Trans Tasman and the Touch World Cup. David regularly mentors many referees and assists them through their levels as well as working with elite referees to improve their skills.

Young Coach of the Year - Stephanie Ibrahim - dragon boats
At the 2017 Australian Dragon Boat Championships, Ibrahim coached the NSW Junior representative crews to four Gold and one Silver medal. Under her leadership her club has gone from being a school based club to one with broader community involvement. Despite her youth, she has shown she can deal with adults (parents, officials and coaches) in a professional and even-handed manner.

Community Coach of the Year - Peter Crombie - athletics
As a Level 4 Coach in Sprints and Relays and a local squad of 18 (including 16 Masters athletes), Crombie had great success at the 2016 World Indoor and NSW Masters Championships with numerous Australian and World Records. He has led senior athletes to achieving Community Coaching level as well as mentoring his Assistant Coach into the role of Women’s Masters Relay Coach.

Community Sport Administrator (Joint Winner) - Carole-Ann Hodges - pony club
Hodges is the State Championship Official Scorer for Pony Club NSW. In this role, Carole has initiated the implementation of cloud scoring which has been seen as both cost cutting and time effective. She is also working to develop a new management system to assist Pony Club NSW staff to handle the large amount of entries for the State Championships.

Community Sport Administrator (Joint Winner) - Judy Tolhurst - gymnastics
Tolhurst is the Regional Supervisor for Hunter Region Gymnastics. In her role Judy has employed an ‘Official Sticker Program’ which acknowledges siblings of gymnasts who volunteer their time to assist at competitions which has proven to be very successful. She keenly promotes programs such as Gym Ability, adapting rules and equipment to ensuring equality to all children and access to the sport.

Community Club of the Year - North Rocks Carlingford Little Athletics Centre
North Rocks Carlingford Little Athletics Centre encourages participation for all, believing in the sport’s ability to address economic, gender, cultural and disability barriers. The Club trialled an initiative to better care for children with disabilities as part of the usual weekly program with great success and have been recognised for their work on social media to engage its members and the community.

Hockey NSW Basil Sellers Regional Challenge - hockey
The marquee event of Hockey NSW, the Basil Sellers Regional Challenge took place in Bathurst and was attended by 2,000 people. 800 athletes (aged 12 to 15 years), played in the round robin tournament, across 80 teams. Hockeyroos and Rio Olympians Emily Smith and Grace Stewart were in attendance, offering participants the opportunity to mingle with their heroes.