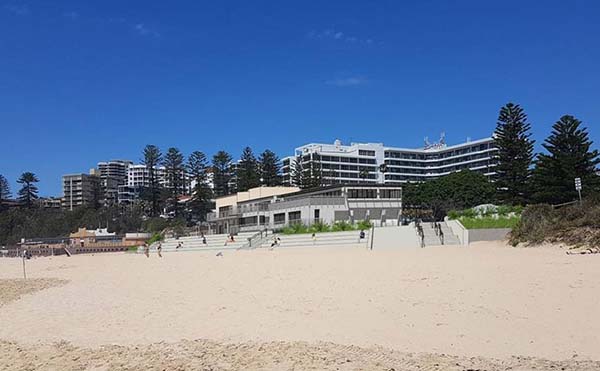 The 85-year-old North Wollongong Surf Club building is to receive a much-needed refurbishment following Wollongong City Council’s agreement to a $10.5 million tender to update the ageing structure. Work will commence at the finish of the 2020-2021 swim season.

Built in 1936, the update will be sympathetic to the clubhouse’s long history and its heritage status - sitting alongside the State heritage-listed North Beach Precinct.

Key to the upcoming project is the construction of a new seawall in front of the Club building. The existing crib lock wall was not designed for coastal wave protection and doesn’t extend to the northern end of the building.

Wollongong City Lord Mayor Gordon Bradbery notes “This is a big project to undertake and it’s important we not only ensure our surf life-saving volunteers have an accessible, safe and functional building to use as a base, but that this important asset is suitably protected from challenging sea conditions.

“The teams will be working hard to get it wrapped up with as little disruption as by possible within this popular area, and in time for the arrival of the UCI Road World Championships to Wollongong.’’

The works to the building and the seawall will start in April and are due to be finished by mid-2022. The work will be undertaken simultaneously, with the seawall project broken down into two stages to minimise the project footprint on North Wollongong Beach.

The seawall works, which have been partly funded by a $4.2 million grant from the NSW Government’s NSW Coastal and Estuary Grants program, are a requirement under the building’s Development Consent with the site considered at extreme risk of coastal erosion by 2050.

Lord Mayor Bradbery added “the stepped design will provide the double benefit of offering the building and beachfront protection from large seas and harsh surf conditions, as well as some of the best seats in the house to watch a North Beach sunrise.

“I am sure that this will be a very popular spot to meet, socialise and enjoy this year-round swimming spot once the project is finished and I’d like to thank the NSW State Government for their financial support to ensure this important project is completed.’’

Once this project has been completed, Council will look to finalise a timeframe for the second stage of seawall works in the precinct. This work will see the construction of a new seawall running south from the Surf Life Saving Club to the North Beach Bathers Pavilion.