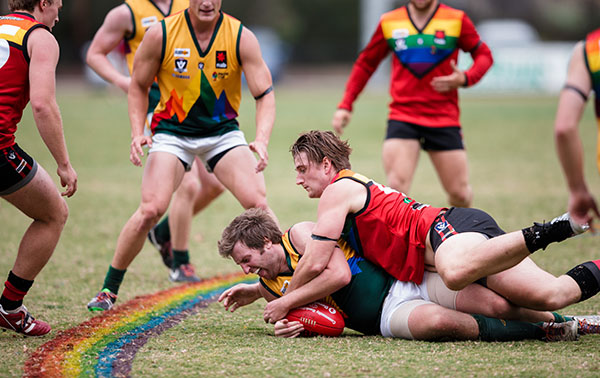 A new Monash University and VicHealth study released this week, titled ‘Evaluating LGBTI+ Inclusion within Sport and the Pride Cup Initiative’ finds that the LGBTI+ community still experiences a range of social barriers to participating in community sport and physical activity across Australia, including being subjected to continued homophobic slurs and behaviour from players and coaches.

The report identified that individuals at nearly half of Australian sporting clubs still believe that homosexuality is wrong or unnatural with researchers noting that such views are insensitive, do not belong in community sport and must change.

Researchers conducted surveys and interviews with more than 500 players, coaches and officials at both Pride Cup and non-Pride Cup participating clubs across the sports of Australian Rules Football, netball, hockey and roller derby.

With support from VicHealth, researchers at Monash University evaluated Pride Cup programs and resources to understand further approaches to the inclusion of LGBTI+ players within sport, and the negative experiences within sporting clubs and communities towards LGBTI+ athletes.

The report shows participants from clubs participating in a Pride Cup were less likely to use discriminatory language than those from community clubs, and have a positive influence on providing supportive sporting environments for LGBTI+ players.

Key findings from the study included:

•Just 51% of all clubs surveyed strongly disagreed that homosexuality was wrong or unnatural.

•Only 11% of men from Pride Cup clubs reported their coach had used homophobic language in the two weeks prior to the survey, compared to 30% of non-Pride Cup clubs.

•About 38% of Pride Cup players witnessed their teammates use homophobic language, compared to 73% of players at non-Pride Cup clubs.

•More than half of men from non-Pride Cup clubs were the target of homophobic slurs in the past year.

•Pride Cup provided a space for clubs and communities to address discrimination and homophobic language.

Additional results showed nearly half of players heard sexist language used within their sporting clubs, and about one-in-five men thought it was acceptable to make jokes about LGBTI+ people and women if they weren’t present in the room at the time.

“Pride Cup clubs had members with significantly higher levels of empathy towards the experiences of LGBTI+ people in sport. But, work still needs to be done in order to eradicate homophobic language, which is disguised as ‘banter’, on the sporting field, as well as provide educational opportunities to help players, coaches and officials change club culture.”

Pride Cup began as a powerful gesture of mateship in country football when the Yarra Glen Football Netball Club supported teammate Jason Ball coming out as gay in 2012.

Since then, Pride Cup has grown into a national organisation dedicated to promoting LGBTI+ inclusion in sport, and challenges homophobic behaviours through the delivery of educational materials and community outreach initiatives.

VicHealth has been supporting Pride Cup for the past three years. VicHealth Chief Executive Dr Sandro Demaio said this evaluation shows how hosting a Pride Cup helps sports clubs support LGBTI+ players, but there is still a lot of work to be done.

Dr Demaio adds “VicHealth is immensely proud of its three-year history with Pride Cup, and this evaluation shows how it helps create supportive sporting environments for LGBTI+ players across Victoria.

“But it’s very concerning that homophobic and sexist language is common and deemed as acceptable at many clubs. We must stamp out this behaviour by continuing to educate and create empathy among players and the broader community. We want everyone to feel comfortable participating in sport, regardless of their sexuality or gender.”

Despite suggesting the Pride Cup has played an important role in raising awareness within community clubs of LGBTI+ inclusion in sport, this has not yet led to an increase in LGBTI+ membership or openness about sexuality.

Denison notes “currently there is a minority of lesbian club members, while gay men and transgender participants are almost non-existent across community sports clubs.

22nd November 2019 - Pride in Practice Conference set to be attended by Business, Sport and Health Leaders