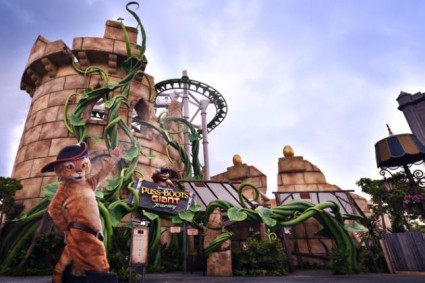 Marking its fifth anniversary, Universal Studios Singapore at Resorts World Sentosa has launched its new Puss in Boots rollercoaster, themed on the character in the Shrek movie franchise.

Designed by Zamperla, the suspended rollercoaster is the latest addition to the park’s Far Far Away Shrek-themed area. ‘Puss in Boots Giant Journey’ has a themed narrative which follows the story of being chased with the golden egg through a giant’s castle.

When boarding riders are encouraged by Puss and Kitty to enter ‘Humpty Dumpty’s flying machine’ in an attempt to escape the Giant’s kitchen with the golden egg. Guests are then sent on a rollercoaster ride with Mama Goose chasing them.

The narrative of the two minute ride is told through four zones and 12 different scenes with 23 Dreamworks animatronics telling the story of the goose chase. The ride reaches a maximum speed of 36 kilometres per hour, with guests experiencing ‘anti-gravity’ sensations.

Once the ride comes to a close, guests can purchase Puss in Boots merchandise exclusive to Universal Singapore.

Commenting on the new attraction, RWS Senior Vice President of Attractions John Hallenbeck stated "the greatest thing about Puss In Boots is that it appeals to the entire family.

“There are parts of the ride which are quick and fun so the thrill seekers will enjoy it and also children will enjoy it."

The ride also links with ‘The Dance for the Magic Beans’ live street show, which premiered last September.