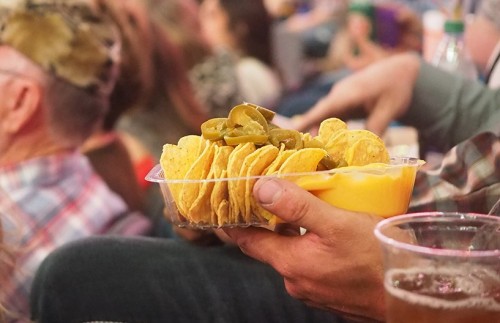 More than 40% of sports fans worldwide abandoned concession lines in the past 12 months, without making a purchase, because of excessive waiting, according to a new report from Oracle Hospitality Sports and Entertainment

Key statistics from the report showed:

• 45% of fans had abandoned concession lines at least once in the past 12 months without making a food/beverage purchase because the wait was too long.
• 64% of fans who said they would “probably use” or “definitely use” in-seat ordering if available at their stadium (non-users).
• 65% of fans who acknowledged that buying food & beverage is based on “impulse.”
• 51% of fans indicated they attend matches to support an individual team or club; 49% indicated attending sporting events is a fun, social activity with friends or family.
• Other than in the USA, the average fan spent 18 Minutes in line at concession stands during events.
• 56% of fans who said they would “probably use” or “definitely use” a mobile app to order and pre-pay for food or beverages to be picked up at an express line.
• $20 Amount that US fans, on average, said they would spend additionally for food & beverage if wait times were cut in half. That represents a 42% increase in typical expenditure (per party, per game).
• 25% of fans had downloaded a mobile app from a specific team or venue.
• 67% of fans said they do not currently own a season ticket or membership plan for an individual team.
• 71% of season ticket holders stated they make F&B purchases at most games.
• 20% of fans who stated they are a member of a stadium or team’s loyalty rewards program.
• 55% for food, 53% for beverage of infrequent purchasers who said cost deters them from purchasing more food and beverage respectively.