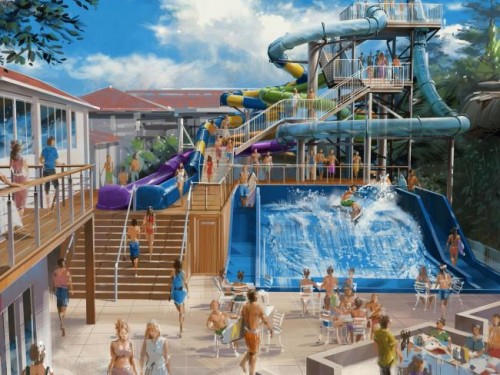 The operators of the Surf n Slide aquatic attraction in the Sydney suburb of Manly have released plans for its revitalisation with four new waterslides, a surfing wave pool and upgraded outdoor seats.

Tracey and Mark O’Sullivan, who reopened the former Manly Waterworks in December last year, are looking to lease land next to the site, including a cafe, from the Northern Beaches Council in order to expand the attraction.

Having obtained a 10-year lease and spent $100,000 on a range of cosmetic improvements to reopen the attraction, the couple have worked with international theme park designers Pico Play Pty Ltd in developing their concept.

The plan includes demolishing the 35-year-old waterslides currently on the site and building four new ones with contemporary run-out shoots - which require land extending beyond the attraction’s current tight footprint as well as a FlowRider artificial surf wave and an interactive toddler pool.

If successful in taking over an adjacent, and currently vacated, cafe, it would be linked to the attraction and used for children’s parties and related events.

However, the O’Sullivan’s are expressing frustration at planning delays, saying they are struggling to put plans through the Council, with Tracey O’Sullivan recently telling local newspaper The Manly Daily “It just doesn’t seem to be going anywhere.

“It is a shame, coming into peak period ... our customers ask on a daily basis if we can help them with a birthday party and why the cafe isn’t open.

“They come here, sit and watch their kids and there is just nowhere to get a coffee.”

Negotiations between the Council, NSW Roads and Maritime Services and the Lands Department are ongoing to merge the land in question, with each owning a parcel.

Northern Beaches Council Infrastructure General Manager Ben Taylor said he was working with all key stakeholders. He said the land ownership was complicated, with boundaries going through existing buildings.

Taylor told The Manly Daily “all parties are in agreement that this needs to be done and Northern Beaches Council is going to continue to try to resolve this as quickly as possible.

“The council is working hard to fast-track the changes. However, unfortunately, the changing of boundaries and ownership does take some time.”

Tracey O’Sullivan said she feared plans would still be stalled in 2018, potentially leaving them to struggle through three summers without upgraded facilities, adding “we would like for the Council to be excited about what we are doing and to see that they will look after this area down here and get it moving.”

The original Manly Waterworks opened in 1981 and gained fame when it was used by a young Nicole Kidman, who rode down a slide to escape chasers in BMX Bandits.

For more information go to manlysurfnslide.com.au

Image: An artist’s impression of upgrades to Surf and Slide in Manly.