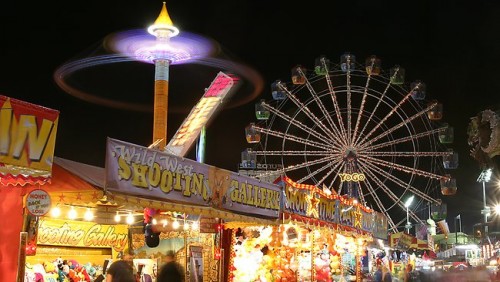 The new-look RNA Showgrounds will be displaying the $65 million Royal International Convention Centre (which opened in February) and the new $7.5 million plaza opened as s part of a $2.9 billion renovation of the venue.

Police at the 136th Ekka are urging parents and carers to avoid losing children at the event by collecting free wristbands and organising a meeting point should they become separated.

The initiative has proved successful at the Ekka over a number of years, helping police easily identify lost children and reuniting them with their parents and carers. In 2012 about 45 children and in 2011 about 86 children were separated from their carers at the Ekka and all were reunited.

Queensland Police Commissioner Ian Stewart said it was distressing for all involved if children and parents were separated, stating "we strongly encourage the use of the wristbands. Parents and carers can avoid some of the distress by discussing with their children what to do should they become separated.

"On arrival at the Ekka, parents should show their children where the police station is located, teach them how to identify a police officer and explain that they need to find a police officer if they become lost."

Parents and carers are encouraged to record their names and contact details on the underside of the wristband so they aren't visible to the general public.

Schools or community groups bringing large groups of children to the Ekka are encouraged to register their attendance with police prior to attending the Ekka. This will enable Police to quickly contact the relevant carers, should a child become separated from the group.

The Ekka runs until 17th August. For details go to www.ekka.com.au

For more information click here to contact AAC ID Solutions via their entry in the Australasian Leisure Management Supplier Directory.