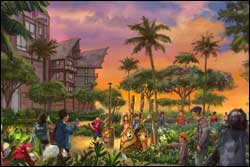 The construction of Hong Kong Disneyland's third hotel is testament of the importance of tourism to Hong Kong's economy.

Tsang stated “we are pursuing a multi-pronged strategy to expand hotel supply. It includes the sale of land for hotel use only, as well as the revitalisation of industrial and historic buildings.

“A number of hotel projects are in the pipeline, and we expect Hong Kong's hotel supply to reach 84,000 rooms within two years.”

Hong Kong Disneyland's third hotel, to be opened in 2017, aims to recreate the grand era of exploration. Adding 750 rooms to the 1,000 rooms now available in the two existing hotels located in the theme park the new hotel aims to meet the demand for hotel rooms in Hong Kong, where demand exceeds supply.

Commenting on the improving performance of the theme park, Tsang added “over the years, Hong Kong Disneyland has become an integral part of Hong Kong's tourism offerings, a world-class attraction that makes the people of Hong Kong proud.

“That brings them happiness - not to mention tourist dollars.”

In addition to new attractions within the theme park, the new hotel will feature winding paths and seasonal flowers within an Asian garden and a combination of yellow and orange tones within a savannah themed area. There will also be an outdoor swimming pool, themed restaurants and a merchandise shop in the accompanying lodge.

Commenting on the design, Walt Disney Imagineering Creative Director David Lee Yong explained “we explored lots of different ideas. One of the key principles is to create something that would be unique to Hong Kong."

Looking to the future, Tsang concluded “the Government treasures the partnership with Walt Disney Company and like any Disney fan, I am thrilled to know there is much more to come, more Disney magic to look forward to."