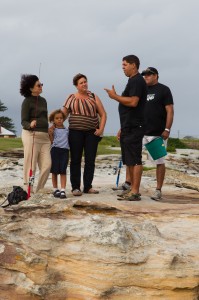 A series of networking workshops held on the NSW South Coast this week have provided operators with an opportunity to develop their vision for Aboriginal tourism.

At the request of NSW Aboriginal Tourism Operators, Destination NSW delivered the workshop in partnership with Ngaran Ngaran Culture Awareness to provide insights into the workings of a successful Aboriginal tourism business.

Commenting on the program, Destination NSW Chief Executive Sandra Chipchase explained “these networking workshops are important for operators to build their business networks, share ideas and receive an update on the excellent progress that has been made on the implementation of the NSW Aboriginal Tourism Action Plan over the last 12 months.

“Since its release in August 2013, 19 of the 26 actions in the Aboriginal Tourism Action Plan have been completed or are ongoing. Of the remaining seven actions, four are in progress and three are in planning.”

Introduced under Destination NSW’s Aboriginal Tourism Action Plan 2013-2016 and a recommendation of the NSW Government’s Visitor Economy Industry Action Plan, the networking workshops provide operators with an opportunity to develop their vision for Aboriginal tourism with the support of Destination NSW.

Chipchase added “there are now many fantastic Aboriginal experiences to be had in Sydney and across Regional NSW, from cultural tours on quad bikes on the North Coast, immersive walkabout tours in the Blue Mountains and the Black Markets on Bare Island in Sydney.

“NSW Aboriginal tourism operators provide visitors with an opportunity to explore the roots of Australia’s Aboriginal culture which is the oldest living culture in the world.”

Koori Communications and Training Director, Peter Cooley continued “we have been working with Destination NSW since we started our small tour - Catch N Cook. Since then we have gone on to run the Black Markets on Bare Island in Sydney.

“Through the whole process Destination NSW and its Aboriginal Tourism Sector Specialist have been by our side, assisting us to grow our business with friendly, professional advice.”

The NSW Government, through Destination NSW also supports WUPA@Wanaruah, an exhibition of Aboriginal art across the Hunter Valley, Corroboree Sydney, Australia’s major Indigenous festival which was successfully held for the first time in November 2013 and the Yabun Festival, which is held in Sydney every January and celebrates Aboriginal and Torres Strait Islander people’s arts and culture.

The Workshop were held on 9th and 10th of September at the Island View Beach Resort, Narooma.

For more information about the Aboriginal Tourism Action Plan go to www.Destinationnsw.com.au/aboriginaltourism