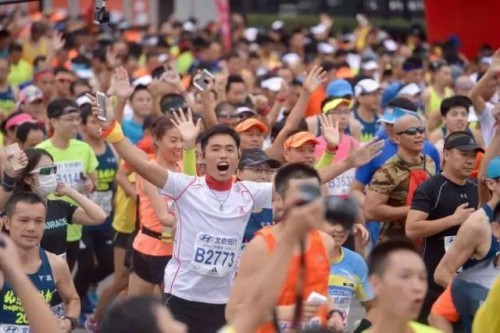 Closing its registration process at the end of last week, the Beijing Marathon Race has seen 98,687 people sign up to participate in the 17th September event, an increase of 48% on last year and breaking the record number of registered entrants for a full-distance marathon race in China.

According to official data, 64,803 of the  entrants have each finished a full-distance marathon within six hours over the past two years and so have been put into the A-Group in this year‘s edition of the Beijing Marathon Race.

The number of A-Group competitors has increased by 43% from last year. The B-Group, which lists entrants who have completed a half marathon within three hours over the past 18 months, numbers 33,884 applicants this year, an increase of 59% on 2016.

The public ballot entry for eligible applicants will be drawn by lottery organised by the Beijing Marathon Race with the final result to be released in the middle of August.

The Beijing Marathon was first held in 1981 and has been held every year since. It begins at Tiananmen Square and finishes at the National Olympic Sports Centre stadium.

For more information go to www.beijing-marathon.com/en/