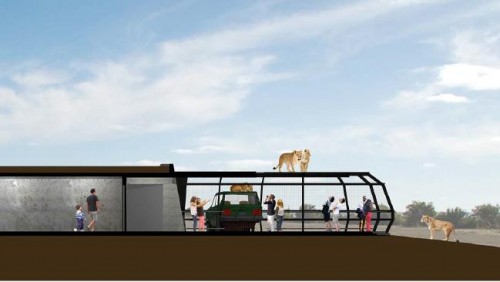 Zoos SA are to develop a new ‘predator experience’ at Monarto Zoo that will enable visitors to stand in the heart of a lions’ den.

The Predator Experience, developed by Zoos SA, will bring visitors up close and personal with the conservation park’s lion pride within their 10 hectare habitat at Monarto Zoo.

Modelled on the popular Great White Shark diving experience, visitors will be able to safely walk through a tunnel under the lion enclosure and emerge in the heart of the 10 hectare lions’ den, surrounded by up to 12 lions.

Zoos SA Chief Executive Elaine Bensted said the predator experience will be a “truly hair-raising experience”, commenting “Monarto Zoo is home to one of the largest lion prides in the country, and this experience will allow our visitors to get closer than ever before.”

As the largest pay-to-enter tourist attraction in regional South Australia, Monarto Zoo attracts over 130,000 visitors a year and it’s expected the Predator Experience will increase that number by an extra 3,000 people annually, spending an estimated $1million in the region.

Construction will start in April and is scheduled to open later this year as part of the zoo’s 20-year master plan.