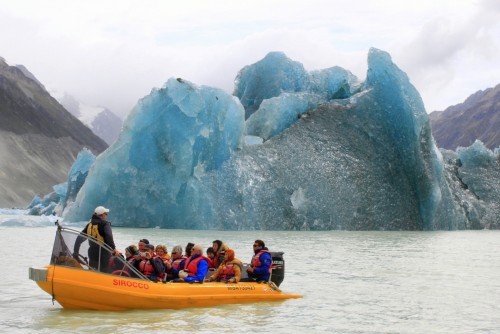 Guests aboard Glacier Explorers boats on 31st January witnessed the result of a spectacular glacier calving at Tasman Glacier Terminal Lake that occurred at daybreak - believed to be the largest since the Block and Basal* calving triggered by last February's Christchurch earthquake.

Long term glacier observer and General Manager Tourism for Aoraki Mount Cook Alpine Village Ltd, Denis Callesen said he believed that the calving would again have moved around 30 million tonnes of ice - around the same amount as last February.

Callesen explained "it was an absolutely magnificent event. A huge chunk of ice has literally broken away from the terminal face, and then fractured into dozens of icebergs. This is the first time that a calving has occurred across the whole 650m-wide terminal face.

"It's an amazing and enormous natural phenomenon."

The calving means Glacier Explorer guests are assured superb viewing conditions on Lake Tasman and an extraordinary view of nature in action for at least the rest of this season.

Photographers have only several hours to capture images of the crystal-clear 'blue ice' on the base of an iceberg, hidden beneath the surface for more than 300 years, before it oxidizes on exposure to air and turns white.

Visitors will see blue ice every day for several months, as from the dozens of new icebergs, one or two will roll over every day as they maintain their equilibrium of 10% above and 90% below the water surface.

For more information go to www.glacierexplorers.com

13th July 2010 - LESSONS MUST BE LEARNED FROM CANYONING DEATHS