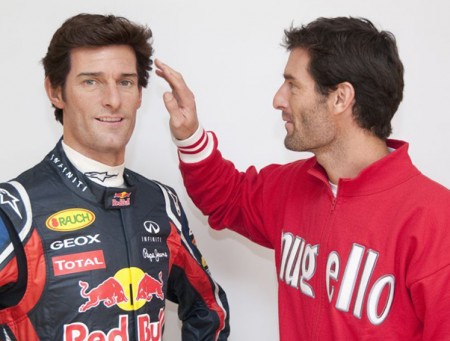 With the Formula 1 season underway, Madame Tussauds Sydney has announced that Australian Grand Prix driver, Mark Webber, will be its first homegrown sportsman to feature in its star-studded line up.

Having just finished fourth in both the season-opening Melbourne Grand Prix and the Malaysian Grand Prix, Webber's wax figure has been given its final touches by Madame Tussauds' artists and sculptors in preparation for the Madame Tussauds Sydney opening early May.

Webber's figure sports his iconic Red Bull Racing suit and will be displayed in the 'sport' section of Madame Tussauds Sydney among other sporting legends, which are yet to be revealed.

Seeing himself immortalised in wax Webber commented "when Madame Tussauds approached me about including me in their Sydney collection, I was rapt.

"It was fun working with the team in London to make a second version of myself, particularly my varying five o'clock shadow! I hope everyone enjoys seeing me in full-scale; I think it's an incredible and accurate representation and I'm still amazed at how perfectly they matched everything, particularly my eyes, which is spooky!"

"We're so excited to be able to give his fans the chance to come up close and personal with him, no matter where he is in the world. There really is an astounding likeness between Mark and his wax figure; I expect fans will get a real shock when they come face-to-face with it."

Representing over 250 years of artistry and techniques, each Madame Tussauds figure is meticulously crafted to perfection with over 60 artists and sculptors. Over 250 measurements were taken of Webber, whose figure took up to three months of dedicated work to create.

Madame Tussauds Sydney is confirmed to open this May on Sydney's popular Darling Harbour - home to some of Sydney's best tourist attractions including Sydney Aquarium and WILD LIFE Sydney.

Guests will be able to step into the world of celebrity with an all star cast of the world's best known personalities and a range of fun interactive experiences.